By Hardeep Batra, Additional Commissioner, WCO Cell, Central Board Of Excise And Customs, India
Countries have to establish a National Committee on Trade Facilitation (NCTF) in terms of their commitment to implementing the Trade Facilitation Agreement (TFA) that was concluded by the members of the World Trade Organization (WTO). In this article, India explains its NCTF implementation journey and how it has structured its NCTF, all guided by its vision to transform India’s trade ecosystem by reducing the time and cost of doing business.

The TFA came into force on 22 February 2017 after having been ratified by twothirds of the WTO’s membership. One of its provisions deals with the creation in each WTO member country of a NCTF. More precisely, Article 23.2 of the TFA Agreement reads: “Each Member shall establish and/or maintain a national committee on trade facilitation or designate an existing mechanism to facilitate both domestic coordination and implementation of the provisions of this Agreement.”

Some countries had already gone ahead and established such committees or similar ones, often with mandates going beyond the requirements of the TFA, prior to ratifying the Agreement. But others still had to establish one. India is one such country, establishing its NCTF on 11 August 2016, soon after ratifying the TFA.

India committed to applying portions of the TFA from the date it took effect, reporting these provisions under “Category A,” and has listed a number of provisions under “Category B,” meaning that it will implement them after a transitional period following the entry into force of the TFA. But the country does not intend to limit itself to the implementation of the TFA. It is pursuing a broader trade facilitation agenda that exceeds the TFA’s requirements.

While working on the NCTF constitution and the definition of its terms of reference, India took into account the “three P” approach adopted by the WCO when it comes to reform and modernization, wherein political will, partnerships and people play a crucial role in the successful working of an NCTF.

Partnership is of course central here. The cross sectoral nature of trade facilitation calls for close co-ordination between trade operators, service providers and government agencies including Customs. Therefore, the composition of India’s NCTF draws on the active participation of all these stakeholders, with successful engagement among all of them being the fundamental approach. The following principles underpin the design of India’s NCTF structure:

Guided by its five working principles, India established an NCTF with a three tier structure consisting of the NCTF (tier 1), a Steering Committee (tier 2) and Working Groups (tier 3), to meet its needs and take its broader trade facilitation agenda forward. 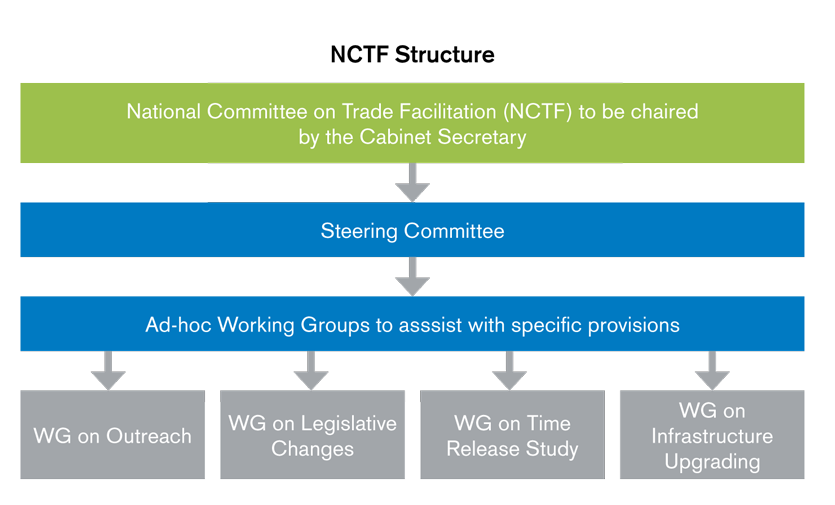 All stakeholders have a seat on the NCTF. It is the policy making body that ensures all projects adopted by the NCTF receive political support. The NCTF is chaired by the Cabinet Secretary, the Government’s most senior civil servant and the head of the civil service.

Among government representatives are the “Secretaries” (administrative heads) of all key departments involved in trade issues such as Revenue, Commerce, Agriculture, Home Affairs, Shipping, Health, the Chairman of the Central Board of Excise and Customs, the Chairman of the Railway Board, and the Director General of Foreign Trade.

The total membership of the NCTF stands at 22 and it can co-opt any government representatives on relevant issues as it goes about its work monitoring TFA implementation progress, ensuring actions are coordinated, and, when required, proposing corrective measures based on internal deliberations and feedback received through various outreach programmes.

The technical provisions of the TFA – in particular, Section I (Articles 1 to 12) – are substantially Customs-related, with 98% of the provisions fully or partially to be implemented by Customs, placing it at the centre of national implementation efforts.

Consequently, Customs has a prominent role to play in the NCTF, where it can share its vast experience in interacting with multiple government and business stakeholders, including promoting coordinated border management (CBM), inter-agency cooperation, and Customsbusiness partnerships.

The Secretariat of the NCTF is housed at Indian Customs’ headquarters, and the National Committee is also responsible for monitoring the work of the Steering Committee (tier 2) and the activities of the Working Groups (tier 3).

The Steering Committee is made up of a core group of 16 public and private representatives. Together, they compile the action plan, monitor its implementation, and report the results to the NCTF to which they can turn to when seeking guidance. They also undertake gap analyses to assess the degree of compliance of concerned departments and agencies with regard to the implementation of each provision of the TFA.

The Committee identifies the nature of change required for achieving full compliance with the TFA, and keeps a watch on the estimated time required to carry out the changes. It receives periodic inputs from all concerned departments and agencies, deliberates on them, and accordingly provides the NCTF with recommendations.

These small groups of experts from relevant institutions work on a specific trade facilitation measure or project. As of now, four working groups have been set up:

Two meetings of the NCTF and three meetings of the Steering Committee have taken place so far. Policy directions were given, various initiatives were monitored and, most importantly, coordination among all players in the supply chain was achieved.

India aims not only to meet the requirements of the TFA, but also to become a global manufacturing hub by improving the ease of doing business. Many of the goals listed in the Action Plan go beyond the TFA provisions, and are known as “TFA plus.”

The NCTF has drawn up a National Trade Facilitation Action Plan (2017- 2020), which was released by India’s Hon. Minister of Finance on 20 July 2017. It is a road map that aims to facilitate trade by transforming the crossborder clearance ecosystem through efficient, transparent, digital, and technology driven procedures, which are supported by state-of-the-art sea ports, airports, rail, road and other logistics infrastructure. The Plan was conceived after considering recommendations from the Working Groups as well as inputs from the private sector.

The Action Plan lists 76 goals divided according to the timeframe associated with their development (short term, medium term and long term), and identifies the lead agency responsible for delivering each of those goals. Activities in the Plan have been mapped with TFA articles. Some refer to TFA articles that India notified under “Category A,” i.e., provisions that India would have already implemented by the time the TFA entered into force. The idea here was to improve existing procedures and mechanisms related to those “Category A” standards.

India aims not only to meet the requirements of the TFA, but also to become a global manufacturing hub by improving the ease of doing business. Many of the goals listed in the Action Plan go beyond the TFA provisions, and are known as “TFA plus.” The idea is to bring down the overall cargo release time for imports and exports as follows:

Since infrastructure and technology are prime enablers for trade facilitation, and more so in India, many activities listed in the Action Plan directly relate to these fields. One of its objectives is to develop a world class infrastructure at ports, airports and dry ports as well as for roads. Ongoing projects include:

India’s vision is to transform the trade ecosystem by reducing the time and cost of doing business. Traditionally, government bodies in the country are seen as regulators, but now the need at the moment is for them to act as facilitators. Meaningful engagement with the private sector, and a structured and comprehensive approach to trade facilitation is being adopted to realize India’s vision.