Enhancing results in the fight against the illicit trade in cigarettes: Dominican Customs’ positive experience

By the Dominican Republic’s Customs Directorate

Illicit trade endangers the healthy structure of trade and industry, and requires constant vigilance from Customs administrations, which, due to their position at the border, play a critical role in combating this trade that causes enormous detriment to state revenues and that of industries around the world.

There are several types of illicit trade activities, including money laundering, drug trafficking, the smuggling of precious stones and metals, and the trade in counterfeit and pirated goods, as well as the trafficking of people and endangered or protected wildlife. The following chart (see Figure 1), published by the Organisation for Economic Co-operation and Development (OECD), shows estimates of the revenue generated according to each type of illicit trade – tobacco, which is in fourth place, accounts for lost revenue amounting to about 40 billion US dollars. 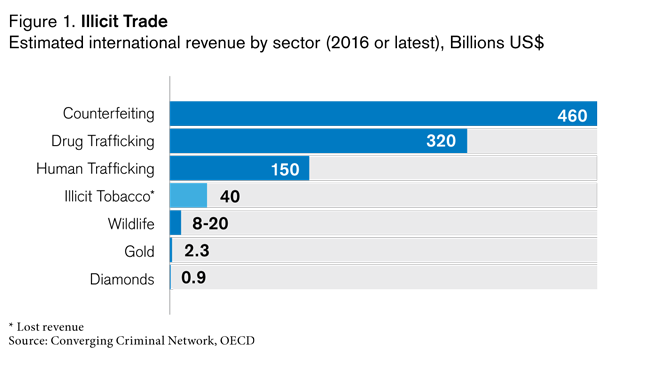 Illicit tobacco trade occurs in all parts of the world, regardless of the level of income of a country. It encompasses practices related to the distribution, sale or purchase of tobacco products prohibited by law, such as tax evasion (sale of tobacco products without payment of applicable taxes), falsification and concealment of the origin of products, as well as contraband.

Cigarettes sales account for about 90% of the global tobacco market. Although there has been a drop in the number of cigarettes sold, its market value has increased [IMARC (2017), “Cigarette Market: Global Industry Trends, Share, Size, Growth, Opportunity and Forecast 2017-2022”].

The WCO 2010 ‘Customs and Tobacco Report’ states that “where goods are highly taxed, easily portable and penalties remain relatively light for trafficking, trans-national criminal organizations will take advantage of any weaknesses in Customs, revenue or other border controls to amass profit.” Trafficking not only affects state revenues, it is also a source of income for criminal and terrorist organizations, according to the 2014 edition of the WCO “Report on Illicit Trade”.

Measuring illicit trade is somewhat complex because of its stealthy nature. A study by the World Health Organization (WHO) estimates that 1 in 10 cigarettes consumed in the world comes from illicit trafficking [www.who.int/fctc/mediacentre/news/2015/wtnd2015/en/].

The following chart (see Figure 2) by Euromonitor International for the 2009 to 2014 period shows the growth rate of the illicit tobacco market over time: the Latin American market grew by about 12%; the Middle East and African markets showed the largest growth in volume of illicit cigarettes sold; and the North American, People’s Republic of China and Asia Pacific markets had decreased. 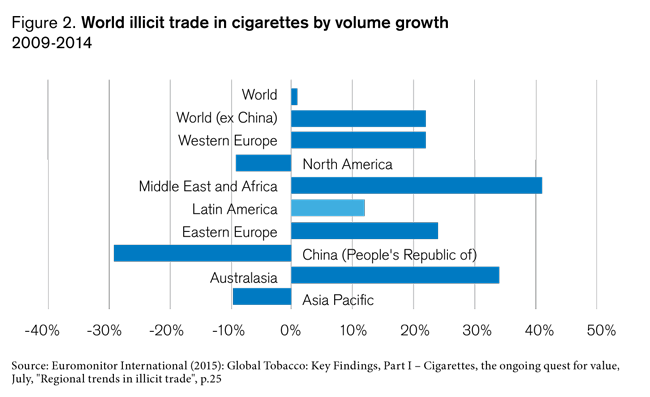 The graph below (see Figure 3) shows the global cigarette volumes produced in 2015 by the four largest tobacco companies. Here we see the extent of illicit cigarette trade, ranking third and with values almost reaching those of British American Tobacco. 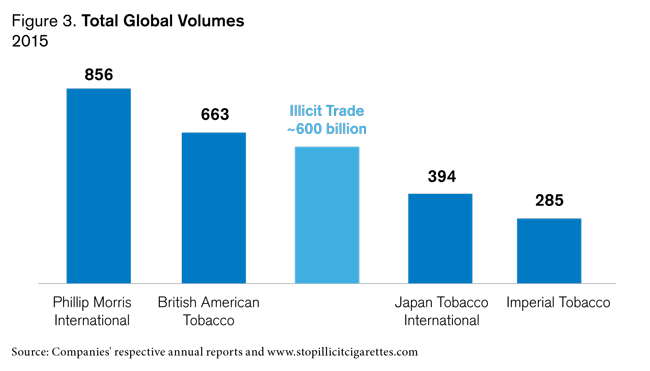 The Dominican Republic’s General Customs Directorate (DGA) is aware that, in a small economy, such as theirs, any wrongdoing can generate company bankruptcies in a short time, which could negatively impact job availability, social welfare and state income.

Therefore, the DGA deals with all illicit cross-border trade in the same way. No case is minimized or dismissed, and Customs enforcement is carried out in a planned manner, with inspections being based on risk assessment, taking into consideration possible damage to environment, health, and competition policy.

The number of cigarette smuggling cases in recent years confirms that it is an important and increasing activity. To fight back, the DGA asked representatives of local tobacco companies to participate. This collaboration has enabled Customs to gain more information on the incidence of illicit sales of cigarettes in the country. The results of the ”Empty Pack Survey” provided by Phillip Morris Dominicana show the evolution of illegal cigarette consumption in the Dominican territory during the 2013-2016 period (see Figure 4). 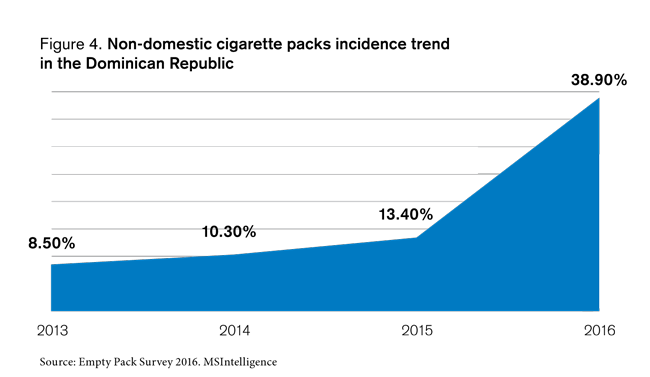 Although these results are nothing but a snapshot of a given moment in a year, they reveal that the number of cigarette packs being sold on the black market has been increasing steadily over the years.

Aware of the growing problem, the DGA has taken specific measures to try to remedy the situation. During the 2012 to 2016 period, around 90 million cigarettes had been seized. Having intensified its efforts, just between August 2016 and August 2017 only, a total of 123.9 million cigarettes was seized and destroyed by Customs (see Figure 5). 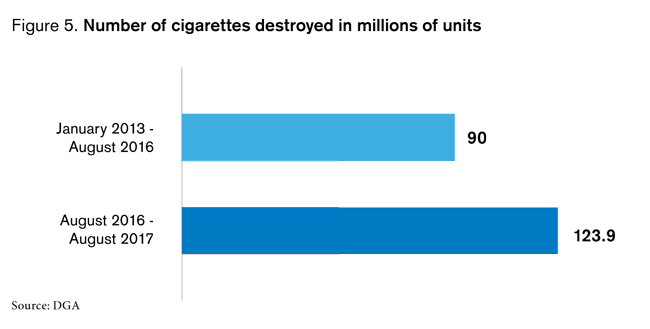 Based on data from tobacco consumption and the revenue derived from it, the DGA can see the results of its efforts over the last year, enabling a total rethink of the level of cigarette consumption in the country, and the impact on the level of collected revenue. In 2016, compared to 2015, Customs saw a decrease in imports of tobacco and in revenue from tobacco sales. In comparing the first six months of 2017 with 2016, an increase in both revenue and consumption has been noted (see Figure 6). 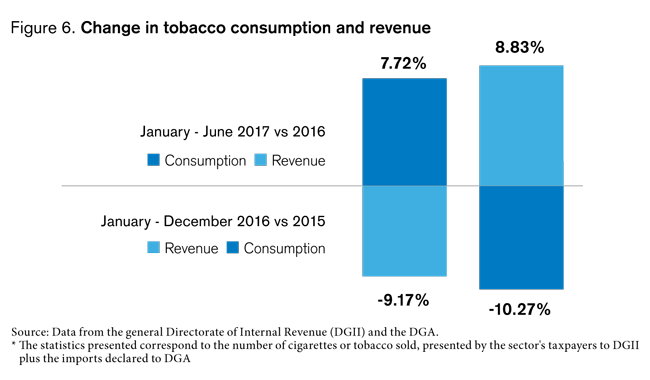 Much of the success that the DGA has had in dealing with the illicit cigarette trade is due to several strategies implemented after 2014. These include the signing of a cooperation agreement with US Immigration and Customs Enforcement (ICE), information exchange with tobacco companies, the use of a tracking and tracing system, as well as coordinated operations with border authorities and law enforcement agencies at strategic points on the island.

Cooperation with other government agencies

Thanks to the cooperation agreement with ICE, the DGA has been able to strengthen the efficiency of its Trade Transparency Unit (TTU). The unit detects anomalies and suspicious trade activities by analysing the details of commercial transactions visible to both countries. To do so, it relies on a specialized system called the “Data Analysis & Research for Trade Transparency System” (DARTTS), which enables complex analyses to be conducted. The system contains trade data from both the United States and other countries, allowing transactions that do not follow normal patterns to be identified.

Dominican Customs has also strengthened its relationship with national public institutions, especially the Office of the Attorney General (as the prosecution and criminal subjection of offenders for these crimes is the responsibility of the public prosecutor’s office), and the General Directorate of Internal Revenue (as these crimes have repercussions on the internal taxes applicable to beverages and cigarettes).

Officers of the DGA’s Intelligence Department carry out inspections together with their counterparts from the National Police and the above-mentioned institutions. These operations take place at ports, airports and borders, and have led to substantial amounts of smuggled products being detected.

The private sector plays a key role in preventing contraband and effectively tackling illicit trade by passing information on suspicious activities or behaviour to Customs officials. A Memorandum of Understanding (MoU) has been signed between Dominican Customs and Phillip Morris International to formalize cooperation in the fight against cigarette smuggling, thus improving Customs’ seizure outcomes.

In recognizing the DGA’s efforts, Alvise Giustiniani, the Vice President of Illicit Trade Strategy & Prevention at Phillip Morris International, declared that, “Illicit trade damages the economy and society, and is a real threat to national security. Its eradication is a challenge too big for any one group, government or company to achieve alone. The Memorandum of Understanding Philip Morris International signed with the Dominican Republic’s Customs Directorate demonstrates how governments and the private sector can collaborate effectively for greater impact. We welcome the Directorate’s strong leadership and focus addressing the illicit tobacco trade, which has already achieved significant success in protecting business, the economy and citizens from this crime.”

This strategy was also adopted by Panama Customs, which also received recognition of its efforts by the private sector. According to Alfredo Argueta, the Country Manager for British American Tobacco in Panama, the Panamanian administration “faithfully follows the successful actions taken by the Dominican Customs as an example on how to reduce the trade in cigarettes entering or leaving Panama’s territory fraudulently.”

Thanks to the use of a tracking and tracing system with stamps being required on every cigarette pack, as well as the analysis of container variables (weight, quantity, importer, etc.), the DGA’s intelligence officials have been able to better find illegal cigarettes, which are often hidden in containers filled with construction material, rolls of cloth, confectionery or energy drinks, among others.

Although cigarettes with recognized trademarks are occasionally introduced into the country illegally, most of those seized by the DGA fall within the ‘illicit whites/cheap whites’ category – these are branded cigarettes legitimately produced by independent manufacturers located in various regions of the world, for which there is no real legal market for their sale, or they are only or mainly intended for the illegal market of another country, or they are smuggled into a destination country and sold without duties and taxes being paid.

Aware of the dynamic nature of illicit trade and that offenders change and adapt their techniques, including declaring cigarettes as lower risk merchandise in an attempt to take advantage of trade facilitation benefits, Dominican Customs is constantly updating its risk management parameters. In addition, before 2014, cigarettes seized from illicit activities were sold at public auctions, but after 2016, the DGA began incinerating all of them to protect its citizens, while securing healthy competition for licit and formal traders and distributors which supply the market.

Dominican Customs understands that contraband, as well as tax evasion, cannot easily be eliminated, but can be reduced by following a comprehensive governmental approach, which requires, above all, strong political will to address all aspects of the illicit trade problem.

Similarly, the DGA recognizes that fully trained human resources are one of the key tools in the fight against illicit trade. Customs officials need to be able to use technological resources and data sources to increase their effectiveness in detecting illicit trading schemes, thus enhancing cross-border enforcement and protecting state revenue, while ensuring the health of the Dominican Republic’s people.

Enhancing results in the fight against the illicit trade in cigarettes: Dominican Customs’ positive experience

Fragile borders and Customs activities in a post-conflict situation: the case of the Central African Republic