By the African Alliance for e-Commerce

In the 20-plus years since first being established in Singapore and Sweden, Single Windows (SWs) have remained the central focus of border clearance strategies. The implementation of such an environment is generally seen by trade experts around the world as a very practical means of improving border clearance performance. Although the SW is but one aspect of a myriad of mechanisms to improve the effectiveness of trade facilitation, it is quite an important one. This article presents an overview of a project undertaken by the African Alliance for e-Commerce (AAEC) to assess the impact of SW architecture on trade transactions in five African countries.

Created in 2009, the AACE groups SW operators in Africa with a view to promoting the concept of a national and regional SW, and has established a platform for exchanging SW implementation experiences. Eighteen operators are members of the Alliance.

With SW solutions implemented by its members having reached a certain level of maturity after more than 10 years of operation in some countries, in 2014 the AACE decided to conduct an exercise in five selected countries in order to evaluate the impact of existing systems on the cross-border process.

To do so, a peer review mechanism was chosen. Representatives of countries involved in the exercise, namely Cameroon, Ghana, Madagascar, Mauritius and Senegal, reviewed their respective systems with the support of World Bank experts.

Most SWs are unique, having being developed according to different needs and requirements, and customized to suit specific contexts. Nevertheless, they can be grouped into distinct categories. The AACE identified three main models:

The aims of the performance reviews were to:

The SW environments of the countries involved were first evaluated against the strategic objective of facilitating trade, or more specifically, facilitating the formalities and exchange of information. The questions covered the major aspects of SWs, and were conceived in such a way as to be of relevance to all countries. Below are some examples:

Evaluation was also conducted, based on indicators related to the time taken to process imports and exports, as well as transit, transshipment and logistics operations. The aim was to measure, based on data extracted from the Customs automated system and the SW system, the end-to-end:

Step 1: ‘Country Self-Assessment’ – A questionnaire was submitted to, and filled in by, each participating country;

Step 2: ‘Peer-to-Peer Team Review’ – A team composed of international and independent experts, as well as government representatives, was established and tasked with validating the self-assessment forms. The methodology employed is decomposed into a sequence of activities illustrated in the following figure: 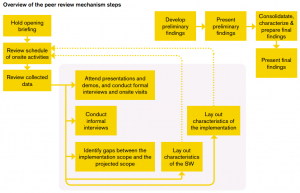 Step 3: ‘Path of Improvement’ – The results of the assessments, along with the experiences of each country, including best practices, were identified and shared among AAEC countries during a Conference. A roadmap for improvement, developed by the World Bank and pair countries experts, was also provided to each country.

The evaluation shows that the implementation of a SW system in the five assessed countries has had a significant impact on transaction processing times. Clearance formalities were handled faster by the government bodies and other actors involved, such as banks. Costs of transactions also diminished as traders or their Customs clearing agents were no longer obliged to physically visit the agencies involved in the clearance process, and to submit paper documents. The most significant gains for end-users are:

As for calculating the return on investment (ROI) in the technology, this issue will be addressed in the next round of assessment.

The SWs which were evaluated do not yet deliver their full potential, mainly because they focus on the submission of data and the information process only. The business process and services were developed with the objective of replacing paper documents. This limitation is understandable, considering the level of maturity and ‘readiness’ of the organizations and trade environments involved.

Whilst dematerialization is an important efficiency gain for end-users, it does not impact on other areas of interaction between end-users and government agencies, and does not support internal collaboration and information-sharing processes. The SWs are now a channel for submitting information and documents, replacing the previous manual paper-based transactions. However, little else has changed with regards to the decision-making process and internal processing by administrations.

Very little innovative and forward thinking has occurred to take these SWs to complete maturity. Enabling internal communication and collaboration during the clearance process, as well as the sharing of strategic information among agencies, is not yet possible through the SWs which were assessed. Internal data could be further integrated to support and possibly automate decisions or parts thereof. Goods inspections could be coordinated, and inspection results and risk assessments shared to reduce delays.

Moreover, the SWs support very little interactions beside the submission of documents by the trader to an administration. All five SWs assessed have functionalities to provide transaction status updates and to allow messaging between the actors, but these services can still be improved to increase the user benefits from the system and to fully move to a transparent and paperless trade environment. It could, for example, enable a user to seek information prior to a transaction, or to get an explanation from government authorities having rendered a decision, or to communicate with those involved during the decision making process.

Customs Brokers: An overview of the outcomes of the WCO Study Report

Some thoughts about Customs brokers: the WCO survey and beyond

A global Customs broker’s insights into the profession’s challenges, successes, and best practices

Homecoming: after 15 years, CBP returns to the World Trade Center

Cooperation: a cornerstone of the EU’s Customs Union