By Susan Holliday, Branch Chief in the Office of Public Affairs at US Customs and Border Protection

After routinely targeting a car import for inspection, a US Customs and Border Protection (CBP) international trade specialist noticed an unusual cat-and-mouse move: The importer did not process the targeted vehicle for United States (US) entry and instead shipped the car, a Land Rover Defender, right back to England where it had originated.

The CBP international trade specialist countered the importer’s move by contacting CBP’s attaché in London, who in turn gave a heads-up to his United Kingdom (UK) law enforcement colleagues to look at the vehicle when it arrived in port. The CBP specialist’s instincts were spot-on. Upon inspection, the British authorities found that the vehicle identification number (VIN) had been manipulated and that the vehicle was assembled with stolen parts – a clear indication of fraud.

The British were intrigued. Recent thefts had been high for Defenders, a model of Land Rover not made for the US market because Defenders don’t meet US safety or emission standards. If talking to the Americans about illegal vehicle shipments would cut down on UK crime, they were all for it.

This one seizure in June 2013 kicked off discussions between the US and the UK on how to establish a formal information-sharing relationship. After the two countries officially signed a letter of intent, Operation Atlantic began in April 2014. Collaboration to prevent illegal international commerce is nothing new to CBP and other US federal agencies working side by si 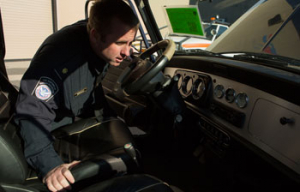 de at the Commercial Targeting and Analysis Center (CTAC).

Since 2009 the 11 CTAC agency partners have learned that by sharing information on manufacturers and shippers of suspect goods – ranging from toys to food to electronics and more – they have a better chance of shutting down the pipeline of unsafe or illegal goods. The rest of the world has noticed too: in 2014, the WCO named CTAC a ‘best practice’ for governments.

When it came to working with the British to clamp down on the import of fraudulently manipulated vehicles, several CTAC member agencies were raring to go. The National Highway Traffic Safety Administration (NHTSA), the Environmental Protection Agency (EPA) and Immigration and Customs Enforcement (ICE) were immediately onboard with CBP.

In fact, NHTSA first requested that CTAC target Land Rover Defenders because of the potential safety problems with vehicle imports that don’t meet US certification requirements, among them standards for seatbelts, crash endurance, airbags and lighting.

The reason that people go to elaborate efforts to manipulate imported vehicles comes down to legal requirements. Vehicles less than 25 years old “need to conform to US federal motor vehicle safety standards and meet EPA standards for emission controls and the US Clean Air Act,” said Chris Polashock, CBP’s Supervisory Import Specialist for the port of Newark in New Jersey.

Vehicles that are more than 25 years old are exempt from the safety standards, while those more than 21 years old are exempt from EPA requirements. But vehicles at least 21 years old with replacement engines aren’t exempted by the EPA unless they contain equivalent or newer EPA-certified engines. Importers try to take advantage of these rules. Hence a Mini Cooper with a 2003 chassis and a 1999 engine may have a 1988 VIN plate under the bonnet. The older VIN gives the appearance that the vehicle is more than 25 years old and legal for import.

“There could be parts that are stolen, there could be parts that are not legal,” said Gordon Roberts, Detective Chief Inspector with the UK Association of Chief Police Officers’ (ACPO) Vehicle Crime Intelligence Service. Such seized vehicles of unknown origin, full of parts cannibalized from other cars, are “a blight to road users” in the US and the UK, said Roberts. With such a suspect provenance, the cars and their parts can’t be resold domestically or overseas. The only lawful destiny remaining for them is their destruction and use as scrap.

Seeing the crushing of such highly desirable cars via media reports can enflame car enthusiasts who don’t understand how hazardous such cars can be on the road. “We’re looking particularly at the Austin Mini and the Land Rover Defender,” said Brenda B. Smith, an Assistant Commissioner for the Office of International Trade at CBP. “They’re very attractive and valuable cars to be brought into the US, but we’re seeing a lot of problems with them.”

The US and the UK agencies are educating the car buff communities about the dangers of these vehicles. “We’ve worked closely with our colleagues at the Department of Transportation as well as our colleagues in the UK,” said Smith, “who are ensuring that vehicles leaving their country and coming to the US are safe for American citizens.”

Over take-out cups of coffee around a Washington, D.C., conference table in early December 2014, UK and US representatives of Operation Atlantic swapped information in person for the first time. They talked about the status of current information-sharing and looked at new targeting tactics for 2015 to further crack down on illegal vehicle imports.

In its 10 months in action, Operation Atlantic’s binational working relationships have stopped criminal activity in both countries. CBP’s Container Security Initiative (CSI) staff stationed at the UK ports of Felixstowe and Southampton regularly work with their British counterparts.

Using CBP targeting protocols, CSI personnel identify containers that pose a potential terrorism risk. They then alert British authorities, who inspect the vehicles and vet the VIN’s against UK and European stolen-vehicle databases before they are placed on US-bound vessels. This can net vehicles that have been manipulated, stolen or otherwise illegally exported.

Alternatively, UK officials will alert their US Operation Atlantic colleagues to inspect, upon arrival, a questionable vehicle already en route to the US. Both teams share information about suspect companies or individuals in frequent conference calls and emails.

This formalized data sharing is different from the collaboration among US federal agencies. The UK doesn’t have access to US databases. This reinforces the importance of cooperation and routine conversations between the US and its UK partners on the people and businesses that deal in illegal goods.

Collaboration between CTAC and the UK Border Force (UKBF) makes perfect sense to Tim Coward, National Container Targeting Manager for UKBF’s Intelligence Directorate. The Border Force is responsible for Customs and immigration controls on people and goods entering the UK. He said that his unit prevents and detects crime, including vehicle crime. “We need your suspect importer information,” said Coward, “and you need our suspect exporter data.”

“Take your data and our data, put the two together and our targeters can really drill down on how they’re getting the cars out,” agreed Acting Detective Sergeant Nick Shrubshall of the UK ACPO’ Vehicle Crime Intelligence Service.

The American and British partners also sat around the table to discuss ways to thwart another recent trend among law-breaking exporters: dismantling vehicles and shipping them as parts. “It’s a growth area of business,” said UK ACPO’ Detective Chief Inspector Gordon Roberts, “chopping up the vehicles and putting them in various crates for export to the US.”

Importing a vehicle in parts – then manifesting the shipment as ‘parts’ or even ‘scrap’ – and reassembling it upon its arrival in the US is illegal. Shippers try to avoid detection by sending disassembled vehicles in multiple shipments, from different ports or from different companies. By sharing what they learn about the criminals’ operations, the Operation Atlantic team better targets and counters the illegal activity on both sides of the ocean.

The operation has “led to interventions amounting to over one million US dollars’ worth of vehicles,” said Roberts, “but arrests have been made in the UK and people have been dealt with in the criminal justice process for altering the identity of these vehicles.”

Roberts said that the criminal profits from international vehicle crime “will be funding drug abuse and other aspects of criminality within our society.” He added that “our working partnership with the US could only be a good thing for international law enforcement, tackling motor vehicle crime together.”

CBP is exploring similar trade enforcement partnerships with other countries. The key to expanding such cooperation internationally lies in disrupting trade in products that harm other countries economically and risk their public’s health and safety.

“We’re actively pursuing engagement with foreign Customs services and regulatory agencies to leverage the collective expertise of the CTAC, as well as to launch specific operations that combat a shared import safety risk,” said Ed Ryan, CBP’s Supervisory International Trade Specialist in the Office of International Trade. “The more we’re able to jointly target with other nations, the greater success we’ll have at shutting down manufacturers that ship products that violate our laws.”

Update on the WCO Revenue Package

Is it possible to use a private laboratory as a Customs laboratory?

Customs laboratories in the United States: at the frontline of fighting fraud

The killing of elephants continues: what can be done to stop the accelerating risk of extinction?