In pursuance of the WCO’s objective to support global sustainability efforts, its Secretariat recently conducted a survey among Customs administrations to ascertain their level of engagement with regards to the implementation of Multilateral Environmental Agreements, or MEAs, as they are commonly referred to.

In total, 54 Customs administrations responded to the survey, which constitutes a 29.5% response rate. 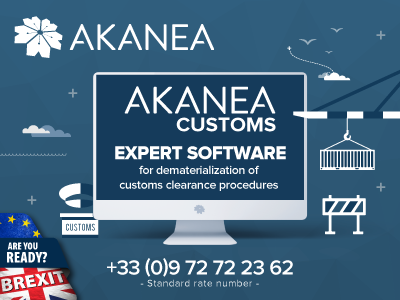 Importance given to MEAs

It is interesting to note that the CITES Convention is the MEA that received the highest number of “critically important” responses (44%), followed by the Basel Convention (33%).

While most of the MEAs have been ratified in a large majority of the countries covered in the survey, their implementation does not receive the same level of importance from different Customs administrations. The “oldest” MEAs, in particular the CITES Convention, are deemed more important than more recent ones, such as the Minamata Convention and the Cartagena Protocol. 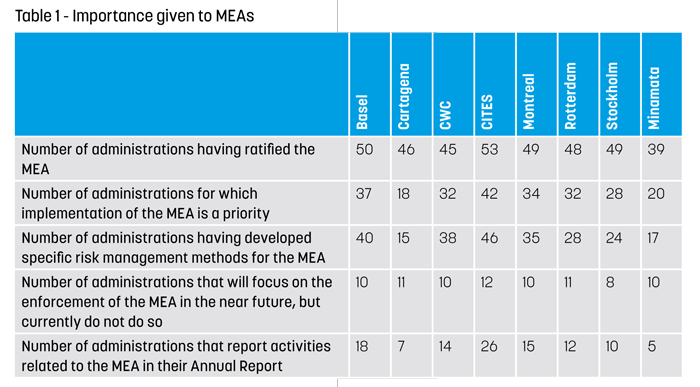 With regards to enforcement capacity, which includes the availability of technical material, trainers and other resources, the CITES Convention once again stands out as the best covered MEA, while very few Customs administrations provide training on the Minamata Convention and the Cartagena Protocol. In general, many administrations are still in need of basic and, in some instances, advanced training.

It is interesting to link the information contained in Table 2, more specifically the first question on the availability of training on MEAs at a Customs school, with the second question contained in Table 1 related to the priority given to each MEA. Although many respondents regard the implementation of the MEAs as a priority, sufficient training is not always delivered to enforcement officers. 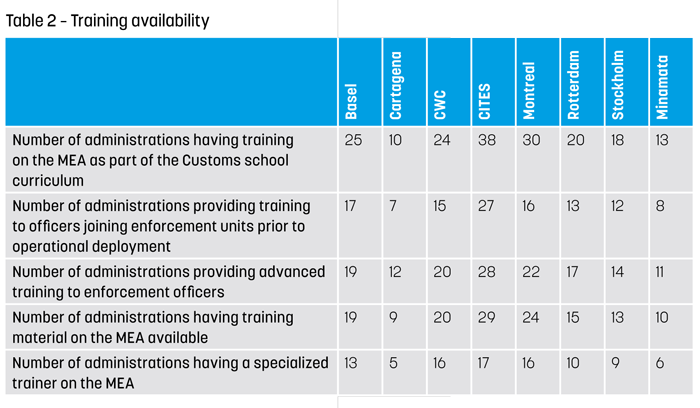 When asked about the availability of operational tools and guidelines related to the identification and disposal of the commodities covered under each MEA, Customs administrations indicated, in many instances, that they lack both. The situation is worrisome when the materials being controlled are hazardous. When mismanaged, such material can compromise workers’ safety and security.

A small majority of Customs administrations said that they have the necessary tools and guidelines enabling them to identify and properly handle goods covered under the CITES Convention, but many also indicated that they have very few tools and guidelines for the goods covered under the Minamata Convention and the Cartagena Protocol. 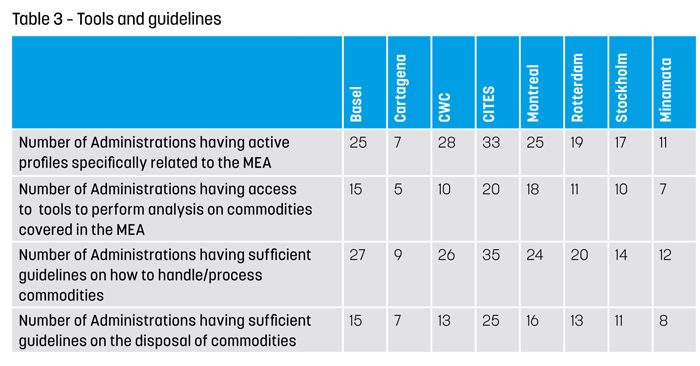 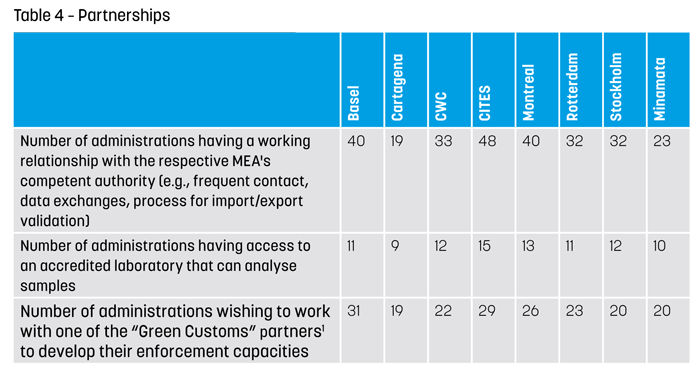 There seems to be a need to close the gap between the perceived importance of the MEAs and enforcement capacities. Building such capacities would require access to technical training material and to trainers, as well as to proper identification equipment and guidelines related to the handling and disposal of commodities once detected/seized.

Although a number of tools to support law enforcement officers in the implementation of the MEAs are available, many administrations are not aware of these tools. More information and some of these tools can be found on the website of the respective MEAs as well as on the WCO CLiKC! Platform.

The results of the survey have been shared with the WCO’s Green Customs partners and will be used when planning future diagnostic missions, training events, expert visits, and enforcement operations.

Where to find information material

A number of tools to support law enforcement officers in the implementation of the MEAs are available. They can be found on the website of the respective MEAs as well as on the WCO CLiKC! Platform. Here is a non-exhaustive list. 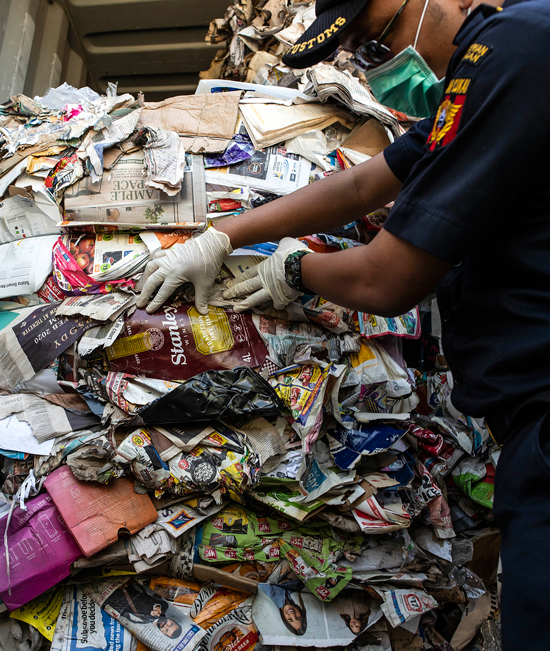