Overall, the RKC is aimed at developing predictable and transparent Customs procedures based on the use of information technologies, risk management, a coordinated approach to controls along with other governmental agencies, and partnerships with trade, among other things. The Convention consists of three parts: the text, a General Annex with 10 Chapters, and 10 Specific Annexes. The entire General Annex is binding on Contracting Parties and no reservations are possible with respect to its implementation. Specific Annexes of the RKC consist of Standards and Recommended Practices regarding other aspects of Customs procedures. Contracting Parties may accept one or more of the Specific Annexes as well as submit reservations to Recommended Practices to the WCO. 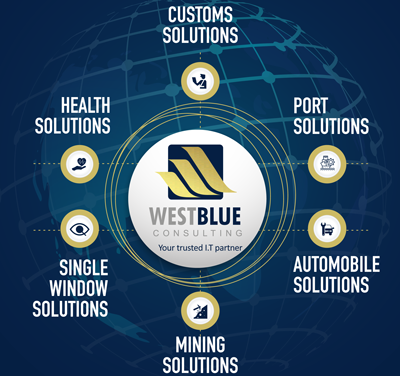 It is now 20 years since the adoption of the current RKC by the WCO Council in 1999. Though no amendments have been carried out thus far, comprehensive Guidelines relating to the General Annex and Specific Annexes of the RKC were developed at an early stage to assist with implementation. Many of these Guidelines have been updated, particularly the Guidelines dealing with “Information, Communication and Technology” and “Postal Traffic”. Further complementing the RKC, the WCO has developed a number of tools to respond to significant changes in the trade environment that impact the Customs community, such as the SAFE Framework of Standards to Secure and Facilitate Global Trade, the Framework of Standards on Cross-Border E-Commerce, the WCO Single Window Compendium, and the WCO Data Model.

Recognizing the need to ensure that the RKC remains the blueprint for modern and efficient Customs procedures, and reflects the rapid evolution of international trade and advances in technologies, the RKC Management Committee (RKC/MC), the WCO working body where RKC Contracting Parties meet to administer, review, amend and update the Convention, began, in 2016, to discuss the possibility of a potential review of the RKC. Subsequently, based on the recommendations made by the RKC/MC, at their June 2018 sessions the WCO Policy Commission and Council approved the establishment of a dedicated working group to carry out a comprehensive review of the RKC. The RKC review is mandated to cover both the structure and content of the Body of the Convention, the General Annex, the Specific Annexes, and the Guidelines, taking into account the work already carried out by the Virtual Working Group set up by the RKC/CM in 2015.

At the 2019 WCO Council Sessions, Members endorsed a new Strategic Plan for the 2019-2022 period, comprising nine priorities that the WCO should focus on, one of which is the RKC. The Customs Environmental Scan 2019 , carried out by the WCO Secretariat, provides an overview of the main global trends affecting trade and their potential impact on Customs’ roles, policies, and practices.

During the RKC review process, several underlying principles and issues were identified by the Members, including in particular:

Since it first met in September 2018, the Working Group on the Comprehensive Review of the RKC (WGRKC) held a total of seven meetings where 179 proposals (132 coming from Members, and 44 from external stakeholders) were formulated and categorized across 37 concepts. 21 Members submitted proposals, primarily during the 2nd (42 proposals) and 4th (37 proposals) WGRKC Meetings as shown in Figure 2. 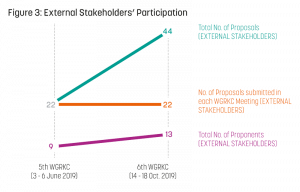 Figure 4 shows how the concepts and proposals are structured and filtered. The 37 broad concepts were classified within the existing structure of the RKC:  Body, General Annex, and Specific Annexes (see Figure 4). 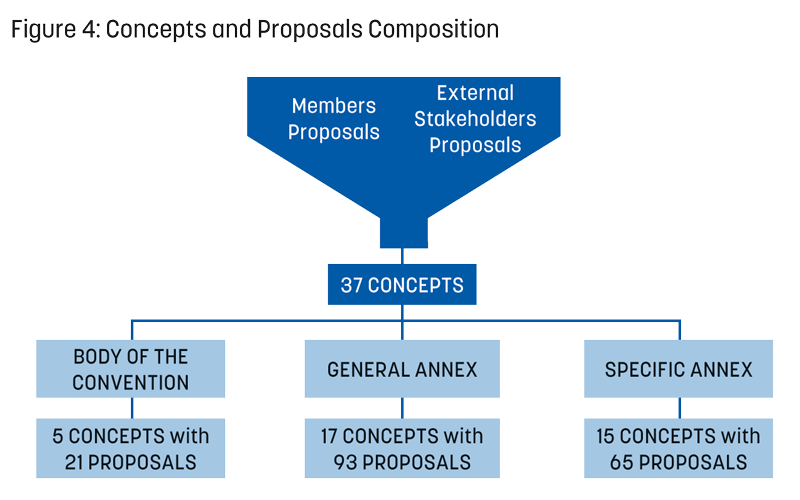 The WGRKC has developed a four-track maturity methodology, as illustrated in Box 2, for reviewing and adjudicating proposals submitted by Members and external stakeholders. Track D indicates a high maturity level, followed by Track A which indicates a fairly mature proposal with minor adjustments to be considered. In the case of Track B, the proposal needs further improvement and additional inputs by the proponent, based on concerns raised or comments made by the WGRKC. If a proponent fails or is unable to improve their proposal substantively or develop it further with the additional inputs required, then after a given period of time it is likely to be placed in Track C as a non-active proposal. 170 of the proposals have already been categorized in one of those tracks (see Figure 5). 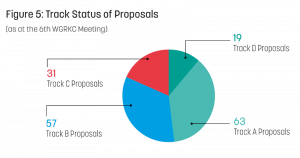 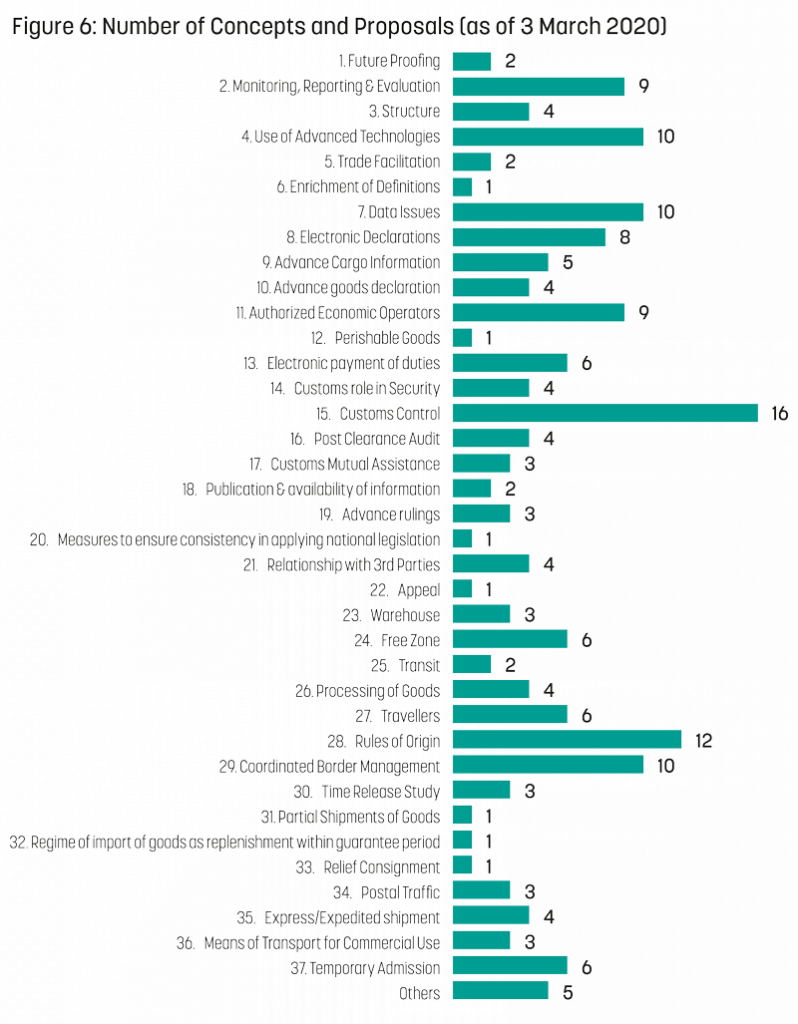 To briefly explain the content of the proposals and their formulation, the proposals on the “MRE” concept are aimed at introducing a mechanism for monitoring, reporting, and evaluating Contracting Parties’ implementation of, and compliance with, the RKC. Proposals related to “Future Proofing” include, among other things, embedding a periodic review of the RKC. Several proposals relate to the use of advanced technologies such as Blockchain, Artificial Intelligence, Non-Intrusive Inspection Equipment, and 3D printing. Several also deal with key issues such as data and systems interoperability. Proposals pertaining to security and risk management are to be found under the “Customs Control” concept. Concerning “CBM”, the main focus of the proposals is on coordination and cooperation, as well as the Single Window.

Moving on to the concepts that are more technical in nature, the proposals under “Rules of Origin”  aim to strengthen the existing Specific Annex K, covering self-certification, the direct transport rule, preferential and non-preferential origin of goods, among others. Proposals on e-commerce and postal issues are laid out under the “Express/Expedited Shipment” and “Postal Traffic” concepts. The remaining proposals relate mainly to procedures, formalities, electronic transactions, measures, and specific requirements/procedures pertaining to various topics indicated in the title of the concepts themselves such as “Free Zones”, “Warehousing”, “Travellers”, and “Relief Consignments”.

After intensive discussions on the way forward of the RKC review process, the RKC/MC, also taking into consideration the RKC amendment process, decided to continue the RKC review under a “four-step framework” described in Figure 7 (click to enlarge). 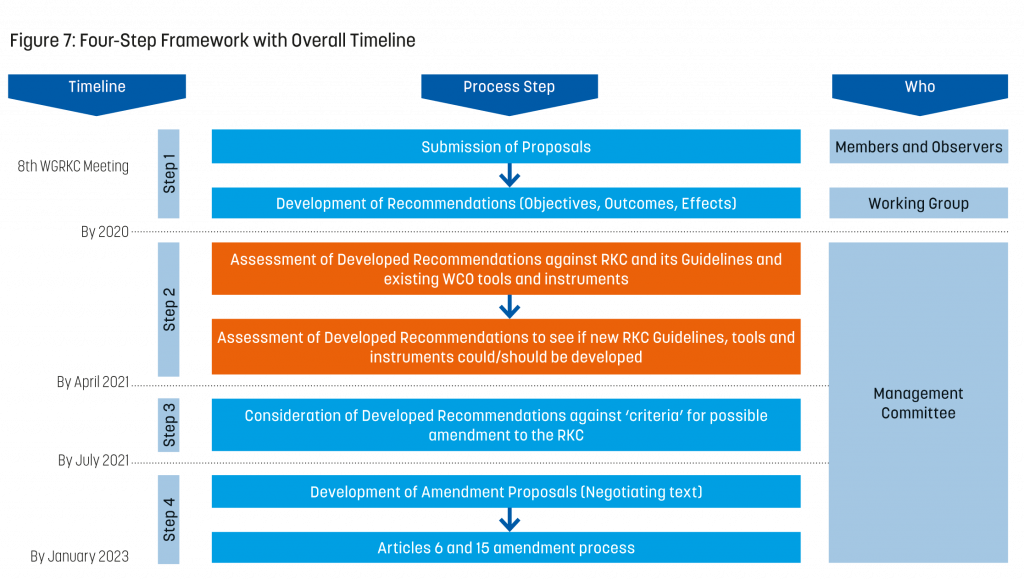 The timeline for conducting and finalizing the RKC review process was extended until January 2023 at the earliest. Step 1, the submission of proposals and the development of recommendation, has already been initiated, and one more WGRKC is to be held to develop the recommendations and finalize all the work. Subsequently, the RKC/MC will take on the responsibility of completing the RKC review work under Steps 2, 3 and 4 of the four-step framework. Step 2, the assessment of the recommendations developed by the WGRKC, will be carried out against the RKC and its Guidelines, as well as other existing WCO instruments and tools. Further assessment will be considered to determine whether an amendment of the RKC is required or not, and/or whether the development of new instruments or tools is needed or not. Under step 3, the developed recommendations filtered through step 2 will be further tested against the criteria endorsed by the RKC/MC to determine which recommendations require possible amendment of the RKC. Should a recommendation go through the prior steps successfully, under step 4, proposals for amendment will be developed and go through the amendment process stipulated under Article 6 and 15 of the RKC.

The RKC review is likely to bring clear benefits for international trade, for both developing and developed countries. For developing countries, the binding nature of the RKC encourages and supports necessary national reforms to ensure that new requirements are met with an adequate legal framework. This helps create better market access opportunities, improve the investment climate, and enhance the ease of doing business in the country concerned. For developed countries, it offers enhanced market access opportunities and a predictable legal and operational playing field for traders.

To stay tuned for future developments, WCO Members are invited to consult the WGRKC and RKC/MC web pages.

Where there’s a way, there’s a will: how the WCO builds capacity to implement strategic trade controls

Some 1,000 Customs officers have already benefited from the WCO Fellowship Programme

Dossier COVID-19: Working with you through these challenging times

From reactivity to proactivity, for a safer and more prosperous world

Customs in the face of COVID-19: the case of Uganda

Customs in the face of COVID-19: the case of Sri Lanka

The invisible and secure border of the future

COVID-19 and its impact on Customs and trade

Customs brokers and the COVID-19 crisis

Controlling the invisible trade: wild plant resources and their sustainability

How the Dutch ports readied themselves for Brexit