In the EU, the “simplification for the determination of amounts being part of the Customs value of the goods” under the transaction value method allows operators to avoid the burden of a two-step declaration – i.e. a simplified declaration followed by a supplementary declaration – and to finalise Customs valuation declarations without delay in situations where there is no risk for the collection of import duties. Such simplifications are becoming increasingly relevant given the growing number of value elements, such as royalties or commissions, that cannot be quantified at the time of importation.

Since the entry into force of the Union Customs Code (UCC)[1] in the European Union on 1 May 2016, economic operators can determine elements of the Customs value which are not quantifiable at the time of importation, on the basis of appropriate and specific criteria[2]. To request such a simplification, a trader must apply for authorization via the central Customs Decision System (CDS), the EU online portal for all applications for Customs decisions or authorizations. Upon consideration, Customs will then grant or refuse authorization for using special prerequisites in determining Customs value. The value obtained by applying the agreed methodology and elements is then considered definitive. 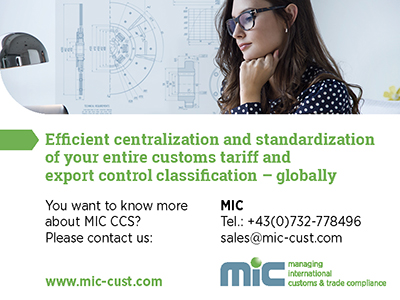 This possibility was first introduced in the EU Customs provisions in 1997[3]. However, the scope of the authorization was limited to additions and deductions related to the transaction value, and did not cover the price actually paid or payable for the imported goods. It was also limited in terms of its territorial validity, as it was valid only in the Member State where it was issued.

The UCC increased significantly the benefits offered to economic operator by both extending  the scope of the simplification to the price actually paid or payable, as well by widening its applicability throughout the entire Customs territory of the EU. The provisions are laid down in three legal acts: the UCC, the UCC Delegated Act (UCC DA)[4] and the UCC Implementing Act (UCC IA)[5].

Traditionally, importers that could not determine a value element at the time of importation would resort to a simplified declaration, which may omit certain particulars normally required. The regular use of such simplification is subject to a prior authorization, and a guarantee is generally required pending the submission of a supplementary declaration providing the missing particulars[6].

Where Customs value is concerned, the EU simplified declaration reflects the spirit of Article 13 of the WTO Valuation Agreement. When particulars for the final determination of the Customs value of imported goods are not yet available at the time of declaring the goods to Customs, the goods may be released, subject to a guarantee that covers the amount of Customs duties due in connection to those imported goods.

The time limit for submitting the missing particulars to the Customs authorities may not exceed two years from the date of the release of the goods[7].

Although the procedure is appropriate where a declarant faces delays in obtaining all the elements for determination of the Customs value, its administration might be burdensome and entail disproportionate administrative costs.

This is why the EU introduced an additional simplification that allows Customs authorities to authorize an estimated value for value elements that are unknown at the time of importation. Accordingly, Article 73 UCC provides that Customs authorities may, upon application, grant authorization for amounts forming part of the price actually paid or payable for the imported goods, as well as additions and deductions to the price actually paid or payable, which are not quantifiable on the date on which the Customs declaration is accepted, to “be determined on the basis of specific criteria”.

In contrast to the simplified declaration, the estimated amounts are retained as part of the Customs declaration and do not need to be included afterwards in a supplementary declaration. The value obtained by applying the simplification is then considered definitive.

For instance, this would apply in cases where the exact amount of licence fees to be included in the Customs value of the licensed products is not known at the time of importation because the licence fee payments are expressed as a percentage of total sales of the licensed goods in the EU during the specified period. Another case might be when the inclusion of price review clauses in a sales contract postpones the final determination of the Customs value of the goods[8].

Article 71 UCC DA describes two categories of conditions which an economic operator must meet in order to be authorized to use this additional simplification.

The first category relates to the need and effect of the simplification for the goods being valued (Article 71(1) UCC DA):

The second category of conditions concerns the applicant (Article 71(2) UCC DA). The authorization may be granted provided that the applicant:

The applicant must supply all the information required by the competent Customs authorities in order to enable them to take the decision. EU Customs legislation establishes common data requirements to this end, including the proposed formula to calculate the relevant value element unknown at the time of importation on the basis of specific criteria[10].

In accordance with the UCC horizontal provisions, the application shall be submitted to the competent Customs authorities of the Member State where the applicant’s main accounts for Customs purposes are held or accessible and where at least part of the activities to be covered by the authorization are to be carried out[11].

As a general rule: “Except where the effect of a decision is limited to one or several Member States, decisions relating to the application of the Customs legislation shall be valid throughout the Customs territory of the Union.”[12] An exceptional limitation of the geographical validity of the simplification must be considered by the Customs authorities on a case-by-case basis, taking account of the individual set of facts on which the application is based and the specific element of the value for which the authorization is requested.

For instance, if the authorization concerns the determination of the amount of transport costs from a third country to a given point of entry in the European Union Customs territory, it is clear that the simplification granted is in principle valid only for the Member States concerned, and only for consignments destined for that given entry point. Where the authorization concerns elements of the value, such as the apportionment of an assist, whose determination is not conditional on geographical/national delimitations, then the general rule of EU-wide validity of all decisions applies.

The Customs authorities are required to monitor the conditions to be fulfilled by the holder of any decision, and compliance with the obligations resulting from that decision[13]. Simplifications of Customs valuation are therefore subject to such monitoring. When the holder of the simplification does not comply with the obligations resulting from the decision, or when the simplification was granted on the basis of incorrect or incomplete information, it may be necessary to suspend, annul or revoke the authorization. This might also result in the amendment of the affected Customs declarations.

In order to support and facilitate the process of taking decisions relating to the application of the Customs legislation, a central Customs Decision System (CDS) has been created[14]. It is an IT platform and trader portal used for all applications and decisions which may have an impact in more than one Member State, and for any subsequent event which may affect the original application or decision. The CDS covers the authorizations on simplifications of Customs valuation, and operators must be able to access it to submit their requests.