The role of Customs has become increasingly complex over the years. On the one hand, international corporations and supply chains actors in general have put pressure on governments to shape a new operating model at the border, based on simplifying procedures and expediting the release of traded goods. On the other hand, governments are demanding that Customs and other border enforcement entities implement more and more regulations aimed at building a fair marketplace and protecting their citizens’ health as well as the environment.

Recently, the spotlight has been put on fighting trade-based money laundering and associated illicit financial flows (IFFs). As the traditional financial system has become increasingly regulated, the comparatively unregulated network of global trade has become an alternative mechanism for moving funds across borders.

There is no agreed definition of IFFs. The Mbeki Report (2015)[1] gives a broad interpretation of the term that includes practices such as abusive transfer pricing, trade mis-invoicing, and aggressive tax avoidance in its scope. According to Cobham and Janský, who wrote the background paper for the First Intergovernmental Group of Experts on Financing for Development organized by the UN Conference on Trade and Development (UNCTAD)[2], IFFs is an umbrella term for a broad group of cross-border economic and financial transactions of which the common element is not illegality, but the use of financial secrecy to remain hidden from public and regulatory view.

In addition, Cobham and Janský explain that the IFFs phenomenon is one of hidden flows, where either the illicit origin of capital or the illicit nature of transactions undertaken is deliberately obscured. Thus, as the nature of IFFs is concealment, its driver element is the financial opacity provided by jurisdictions known as tax havens or secrecy jurisdictions.

Different researchers have identified trade mis-invoicing as the main channel for IFFs. Trade mis-invoicing can be defined as fraudulent cases where either the importer or the exporter – or both – manipulate the value (e.g., price, quantity, or quality) of goods in their Customs declarations. A specific form of mispricing is known as reinvoicing. Global Financial Integrity (GFI), a think tank, describes the process as follow: “Reinvoicing happens when goods are exported from one country under one invoice, then the invoice is redirected to another jurisdiction – typically a low-tax or no-tax jurisdiction (or tax haven) where the invoice price is altered, then the revised invoice is sent to the importing country for clearing and payment purposes. By artificially overpricing imports or underpricing exports, this process shifts profits out of developing countries, usually for purposes of tax evasion.”[3]

In 2014, Global Financial Integrity (GFI)[4], undertook a study in Brazil, producing a report entitled “Brazil: Capital Flight, Illicit Flows, and Macroeconomic Crises, 1960-2012.” One of its findings is that mis-invoicing comprises the largest proportion of capital flight from Brazil and that the deliberate under-invoicing of exports is the preferred method to transfer illicitly transferring “out” of the country or, to put it more accurately, preventing funds from entering the country and being taxed there.

According to Brazilian scholar Valtair Soares Ferreira[5], who analysed the mechanisms of tax evasion and fraud on Brazil’s commodity export transactions, the manipulation of transfer pricing rules and the use of “reinvoicing centres” in secrecy jurisdictions have been used by companies to reduce their tax liabilities in the country. International tax law scholar Alberto Xavier[6] also highlighted the role of offshore intermediary companies, located in tax havens, in fraud schemes based on “reinvoicing.”

As evidence emerged on the magnitude of the issue, the Federal Government of Brazil established, in 2018, an Ad Hoc Working and Research Group on Illicit Financial Flows via Trade Mis-invoicing, which includes specialists in Customs, tax and intelligence, charged with identifying how best to tackle IFFS associated with international trade transactions. The Group is the first of its kind at the Federal Revenue and Customs Services of Brazil (RFB).

The Group’s experts based their work on the assumption by Cobham & Janský[7] that, as IFFs are by definition hidden, the likelihood of fraud increases with the degree of financial opacity offered by the jurisdictions involved in a given transaction: the higher the degree of opacity, the greater the risk of IFFs.

Transactions were categorized according to their risk exposure to IFFs as follows:

Based on the pre-defined risk exposure categories, historical trend charts were compiled to analyse the evolution of risk exposure to an IFF on export transactions.

The graphic shows that, after 2006, there was a significant increase in transactions that represent high risk exposure to an IFF. This increase is mainly due to an increase in triangular or multi-layered transactions involving parties based in a tax haven.

Similarly, historical trend charts were compiled for import transactions. The graphic shows a small increase in high risk import transactions after the 2008 financial crisis, with a slight decline from 2014 to 2015. Overall, Brazilian exports are more exposed to an IFF than imports. 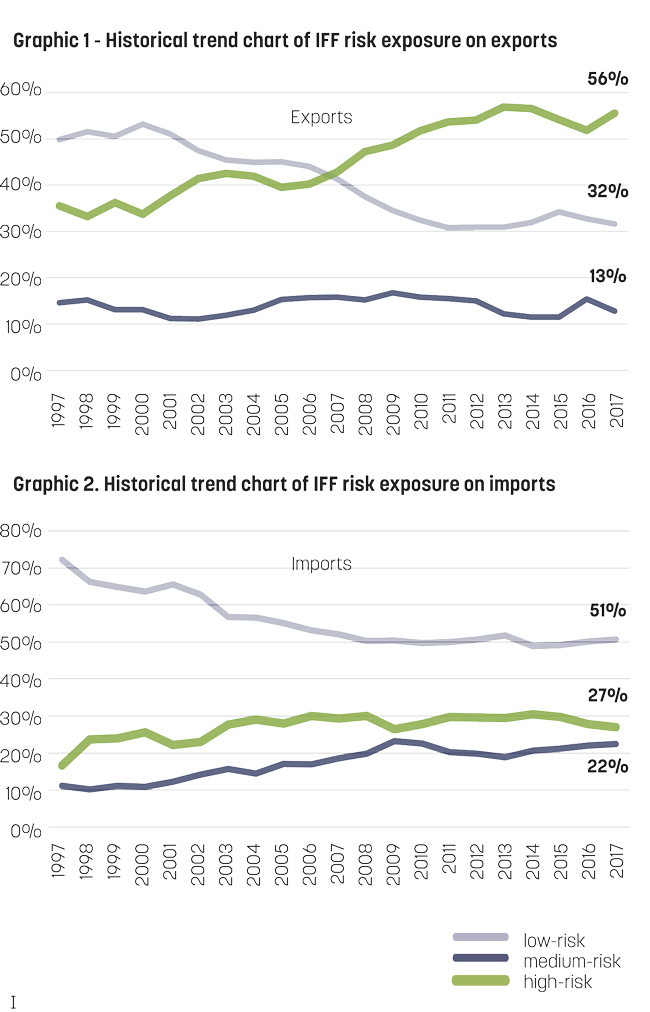 Commodities represent 60% of Brazilian exports. As such, it was decided to analyse the pattern of financial flows according to the type of commodities being exported. They were assembled in groups such as soya beans and derivatives, orange juice, minerals and metals, etc. One of the findings is that most of the transactions of these commodities rely on triangular operations with tax havens or privileged tax regimes. 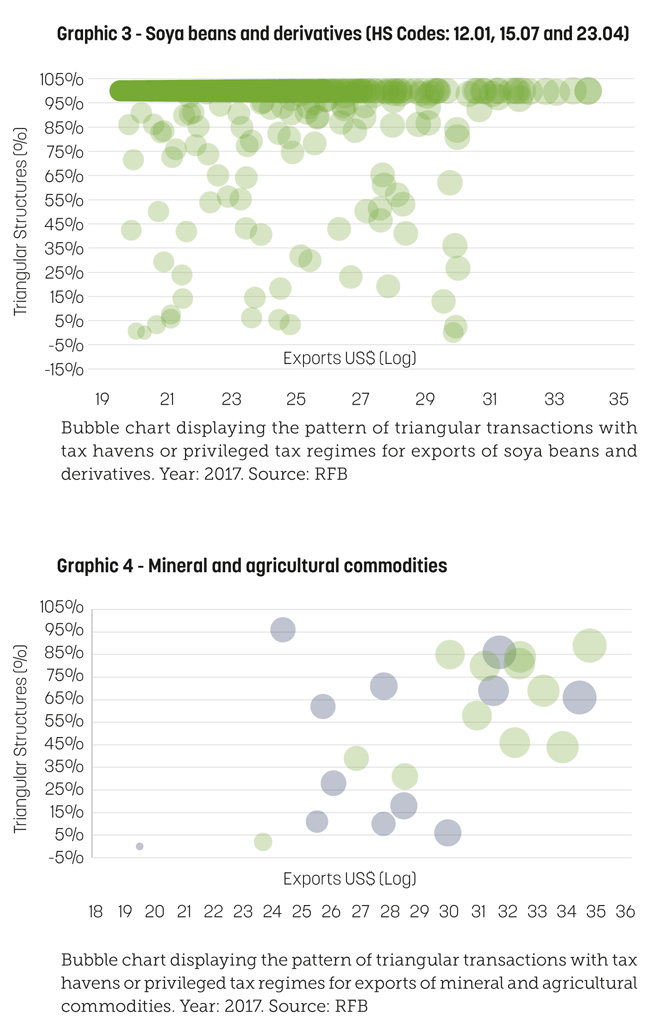 Graphic 5 lists Brazil’s main “trading” partners, comparing, for each of them, between 2012 and 2017, the value flow of goods physically arriving in the country of destination as declared in the export declaration with the corresponding financial flow originating in Brazil associated with the exports. 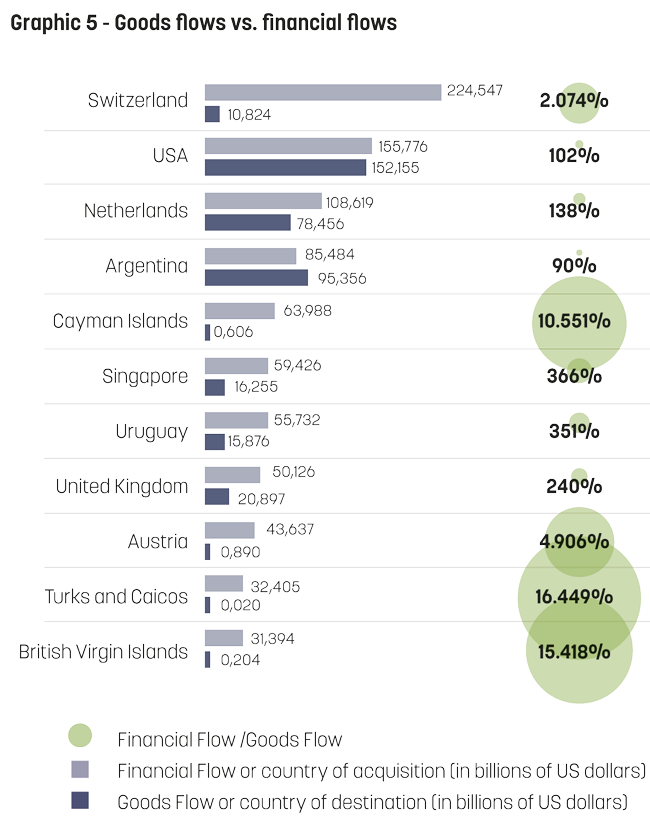 One can see, for example, that the financial flow directed to the Cayman Islands was around 64 billion US dollars while the value of the goods that actually physically enter the Islands was less than one billion. In a pattern that can be observed in many other countries that offer financial secrecy and attractive tax conditions, Cayman-based companies sell the goods at a considerably higher price to another country during international transit or even before, often without any economic substance that justify the difference in prices. In these cases, Brazilian goods were directly shipped to different countries of destination.

This evidence suggests that triangular or multi-layered operations may have been used as a channel to transfer proﬁts to lower-tax jurisdictions in order to reduce tax liabilities in Brazil. Secrecy jurisdictions and the lack of transparency likely played key roles as drivers of this trade mis-invoicing.

Although there is no indisputable methodology for calculating the amount of tax losses caused by atypical financial outflows, the relevance and economic impact of the issue to Brazil is absolutely clear. With this in mind, Brazil is undertaking various actions and intends to take a variety of other actions in its efforts to equip itself to effectively fight IFFs. Below are some of the measures that have been taken as well as others that are envisaged.

To identify IFF fraud patterns, Brazil has identified the need for integrated action between the internal revenue and Customs services. Customs can certainly collect information during the export clearance process and undertake post clearance audits to obtain a complete picture of the commercial operator and ascertain the quality and values of a declared transaction, including reporting to the internal revenue service in cases of doubt. Customs and internal revenue service work together to ensure that export values are correctly declared (Customs role) and that taxes on profit are properly collected and corporate tax laws are fully complied with (internal revenue role).This approach is facilitated in the case of Brazil, since both services belong to the same entity.

A risk management tool using graphical analysis was developed and subsequently launched. The objective of this tool, which is known as IFF-Explorer, is to enable the identification of anomalies and triangulation patterns related to IFFs in international trade transactions. The tool can be set up for application of the partner-country trade analysis method (PCM) or the price filter method, both methodologies widely applied to detect and estimate trade mispricing, and also to detect triangulation.

Data analysis and exchange of information

Further analyses to dimension the magnitude of IFFs in trade transactions still have to be carried out. One of the analysis methods we are considering is mirror trade data analysis to identify anomalies or gaps in the declared values of exports and imports on both sides of the trade flow, on the basis that these reveal illicit shifts of value. Multilateral automatic exchange of transaction-level trade data would be a key enabler here. In this regard, the Ad Hoc Working and Research Group on IFFs via Trade Mis-invoicing recommended the launch of a pilot project aimed at testing automatic exchange of transaction-level trade data with a trade partner country, based on blockchain technology.

Moreover, Brazil is a signatory to the Organisation for Economic Co-operation and Development’s (OECD) Convention on Mutual Administrative Assistance in Tax Matters and to the Multilateral Competent Authority Agreement on the Exchange of Country by Country Reports, which was based on the Convention. The Agreement enables the automatic exchange of country by country reports prepared by the “reporting entity” of a multinational enterprise and filed on an annual basis with the tax authorities of the jurisdiction of tax residence of the entity as well as with the tax authorities of all jurisdictions in which the enterprise operates. In order to better analyse the data that it will receive, Brazil Customs is developing analytical tools as the images of the prototypes demonstrate.

Following OECD and WCO policy recommendations and based on the work of the Ad Hoc Working and Research Group on IFFs via Trade Mis-invoicing, the RFB also intends to set up a joint tax-Customs task force in 2019 to tackle IFFs via trade mis-invoicing, and to develop joint tax-Customs targeting, audit and compliance programmes. One of the mission of the task force will be to review penalties to make them more adequate as the penalities currently established are too strict and do not encourage companies to regularize themselves. The ultimate objective of RFB is not to sanction per se, but to seek the regularization of companies and the elimination of the use of international trade as a means of tax evasion and conduit for illicit financial outflows from Brazil.

Regarding Customs procedures, there is a need to improve the registration and control of international trade transactions. A complete overhaul of SISCOMEX is underway, including a simplified procedures approach and the design of a fully revised flow. The new system will provide statistical analysis, and is expected to greatly improve the Customs risk analysis process.

Gearing up to meet the challenge

The RFB is in the process of building an arsenal to fight IFF schemes, including triangular schemes. While the challenge is great, Brazilian Customs believes that it is possible to combat IFFs without hindering the flow of international trade.

[8] SISCOMEX is the Brazilian Integrated Foreign Trade System and is short for “Sistema Integrado de Comércio Exterior”. It is used to register foreign merchandise transactions (imports and exports), allowing the Brazilian Government to monitor foreign trade.