By the World Organisation for Animal Health (OIE)

Several countries around the world are facing the devastating effects of the African swine fever (ASF), a deadly pig disease of viral origin. The virus can travel from one country to another through people carrying infected pigs or contaminated pork products or clothing. Customs officials can play a key role in preventing the spread of the disease by setting up effective controls. By doing so, not only are they safeguarding animal health, but also food security and the global pork industry.

What is African swine fever (ASF)?

ASF is a highly contagious disease of domestic and wild pigs. Mortality rates may be as high as 100%. This disease is transmitted mainly by humans, as the virus can survive on clothes, boots, wheels, and other materials. It can cross borders if adequate measures are not implemented. Currently, there is no approved vaccine against ASF. Prevention in ASF-free countries is reliant on the implementation of appropriate import policies and border controls to ensure that neither infected live pigs nor pork products are introduced into these areas, as well as on the rollout of an effective information campaign to inform travellers of action and behaviour to be avoided.

Why is it important to stop the spread of this disease?

The recent upsurge of ASF around the globe was responsible for massive losses in pigs and drastic socio-economic consequences. This disease is not a danger to human health. However, it poses a major threat to pig health and welfare and, therefore, to the pig production systems. Considering that pigs represent a main source of animal protein among a growing human population, ASF not only impacts the livelihoods of small and large-scale pig producers, but also threatens food security worldwide.

Why is ASF an issue today?

Due to its complex epidemiology, the disease has spread relentlessly, affecting more than 50 countries in Africa, Europe and Asia since 2018. Only in Asia, over 6 million animal losses have been reported after the introduction of the disease into this region. More recently, ASF has entered the Americas for the first time in almost 40 years, as in July 2021, the Dominican Republic reported the first case in the region.

After disseminating an official alert through its World Animal Health Information System (OIE-WAHIS), the World Organisation for Animal Health (OIE), jointly with the Food and Agriculture Organization (FAO), mobilised its networks of experts in order to provide support to other countries of the Americas region. The OIE and FAO experts called on countries, among other actions, to reinforce their border controls with the aim to mitigate the risk of disease circulation across countries. 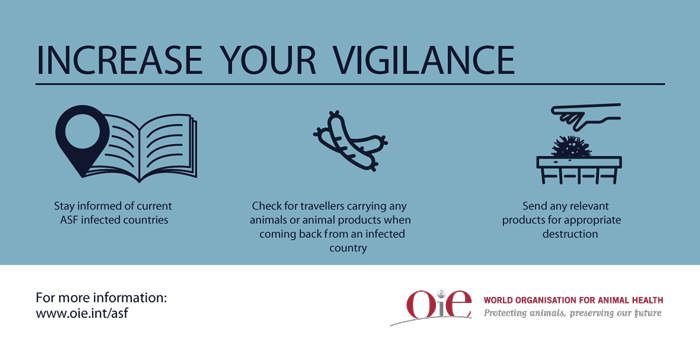 How can Customs officials help?

Customs officials are at the forefront of international passenger mobilisation. By increasing their vigilance, they contribute to prevent this deadly pig disease from crossing borders. In case of noticing any suspicious products of animal origin, Customs officials should contact the Veterinary Services of the country immediately.

To reduce the risks of ASF dissemination, it is equally important that Customs officials remain informed on the countries currently affected by the disease. This information can be found from the OIE-WAHIS, the main source of animal health data.

It is also critical that all those who could be involved in the direct and indirect transmission of ASF are aware of the impact of their actions. In this scenario, efficient risk communication becomes an essential component of the disease response. As part of the “ASF kills pigs” awareness campaign, the OIE has produced communication tools for travelers, as well as a campaign guide that shows how to use and disseminate these tools at different stages of passenger transit by air, see, or land, including at Customs checkpoints. All the tools are available in English, French, Spanish, Mandarin and Russian. By disseminating them, Customs officials can help raise awareness on the disease.

The cooperation between different actors is of utmost importance to curb the spread of ASF. The OIE would like to express its sincere gratitude to the World Customs Organization and its members for their support in the fight against ASF, and for being engaged in the protection of animal health and of the livelihoods of some of the world’s most vulnerable populations from this devastating pig disease.