By Zhiqiang Chen, Chairman and President of NUCTECH

Customs authorities are showing a growing interest in adopting artificial intelligence (AI), the broad category of science that entails simulating human thinking capability and behaviour. As stated in a joint paper published by the World Customs Organization, (WCO) and the World Trade Organization (WTO) entitled The role of advanced technologies in cross-border trade: A Customs perspective, “around half of Customs authorities use some combination of big data analytics, AI and machine learning, while the other half plans to do so in the future.”

AI has become one of the most transformative technologies for Customs, acting as a force multiplier to help it navigate challenges such as strained human resources and supply chain vulnerabilities, as well as security and revenue risks posed by the flow of goods generated by online sales.

AI holds the key to ushering Customs into a new era of automation and efficiency. Among other things, AI has become an integrated part of non-intrusive inspection technology and helps Customs officers identify specific objects, abnormalities, radioactive materials, and goods such as tobacco or liquor bottles, within seconds. The list of items which can be identified automatically with threat recognition technology is ever expanding, and the technology can be tailor-made to address specific commodities and smuggling trends.

During tests under real operating conditions conducted by China Customs, Tsinghua University and NUCTECH, a total of 1,182 types of goods were effectively identified by non-intrusive inspection (NII) systems equipped with AI. Among them, 49 were restricted and prohibited items. 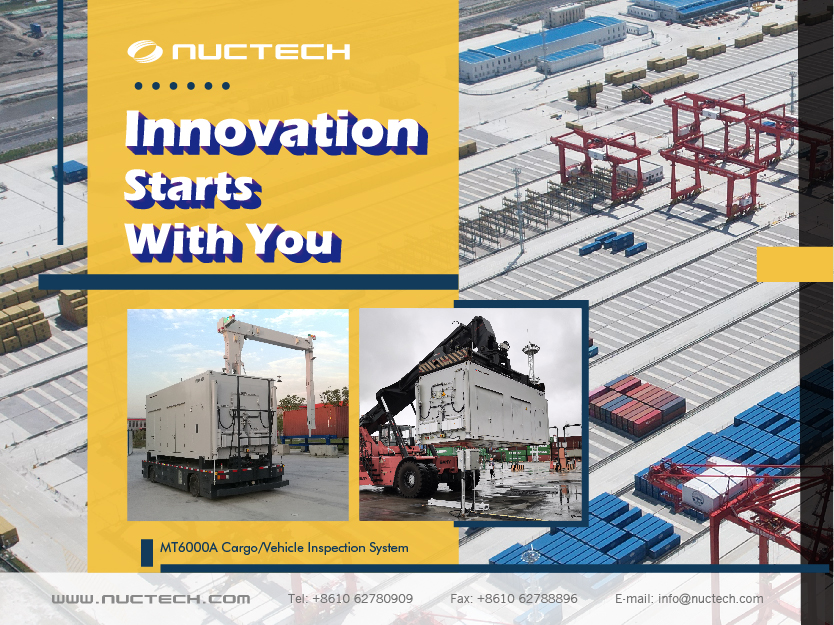 For seaborne containers, such automatic detection offers opportunities in transforming Customs inspection into a streamlined en-route process, significantly increasing inspection rates without disrupting travel or trade. Take the Port of Qingdao in China, for example, where a sky rail is used to transport containers. A modular high-energy inspection system scans every container transported along the rail route. In a field where time is money, the solution not only enables significant time savings and comprehensive security vetting, but also slashes the cost of container dispatching by 100 US dollars per container.

En-route screening can also be applied to breakbulk cargo provided the vehicle transporting the cargo passes through a scanning device along its way. This will be the case in one automated port terminal expected to be operational soon, where NII systems are being mounted on automated guided vehicles (AGVs), the name given to material handling systems or load carriers that travel autonomously throughout a warehouse, manufacturing facility or port without an onboard operator or driver.

Automatic threat detection systems also make 100% screening of inbound baggage a reality. They enhance security and improve travel experiences. Customs in China and Thailand, for instance, have integrated AI solutions, scanners, radio frequency identification (RFID) seals and closed-circuit television (CCTV) altogether to drive informed decision-making in a highly efficient manner. All checked baggage is screened, scanned and monitored before being conveyed to carousels at airport baggage reclaim areas. Suspicious baggage is automatically labelled with an RFID seal which triggers an alarm when the passenger goes through Customs. Those particular passengers are stopped for further scrutiny, while those with baggage deemed as low risk can breeze through exits without any interruption to their free movement.

Image analysis can be a repetitive and tedious task. During a trial contest organized between humans and machines, the latter outmatched human operators in terms of positive detection rates. Only seasoned experts with over 10 years’ experience were able to perform a little bit better than the machines. On average, it took human operators 45 times longer to analyse an image.

AI could offer efficient support to image analysts, especially those with little experience, and reduce the time required for such analysis. With AI as an assistant, operators could work without feeling the usual fatigue that the job entails, and focus on critical decision-making. In short, the image analysis process would be improved, shorter and less labour-intensive.

Apart from identifying items, AI can also help Customs obtain useful data such as the number of items in a cargo consignment, as well as their size and weight, within seconds.

With expertise derived from 1,000-plus AI-powered deployments, we believe that AI is finding its way into all the critical aspects of Customs control, thereby making the latter more effective, efficient and robust.

Professor Zhiqiang Chen is a researcher working on radiation imaging at Tsinghua University (Beijing), while also serving as the Chairman and President of NUCTECH. With the aim of bringing technology to life, he has steered the NUCTECH team towards rolling out cutting-edge inspection technology in various fields, including Customs controls and airport security. Under his leadership, NUCTECH has evolved from a small company into a global business with over 50,000 scanners and solutions deployed in more than 170 countries.