The WCO Secretariat has set up a team to study the possibilities for potential improvements to the HS and its tools. The team will collect views and suggestions from stakeholders. Details of how you can get involved in the HS Study can be found at the end of this article.

The Harmonized System Convention, and the Harmonized System it governs, came into force in 1988 with the intent to provide greater uniformity for the classification of globally traded commodity groups. Since the introduction of the HS, its use has spread globally. As of 1 October 2022 the Convention has 160 Contracting Parties, and the HS is currently incorporated in the tariff classification schedules of 212 economies (countries, territories, or Customs or economic unions). It not only determines the classification of goods and applicable Customs duties, but is also used to identify goods for a variety of trade facilitation measures, statistical information, Customs controls and other trade-related purposes.

Since its inception, the HS has been amended to produce seven new editions to reflect changes in technology and the patterns of international trade. However, these amendments have generally involved changing various provisions for specific types of goods. This periodic review is in itself a very time and resource intensive process, and provides only a limited opportunity to look more holistically at the HS, its tool set (Explanatory Notes, Compendium of Classification Opinions and Alphabetical Index) and the processes and procedures around its international management in order to assess the overall health of the system. 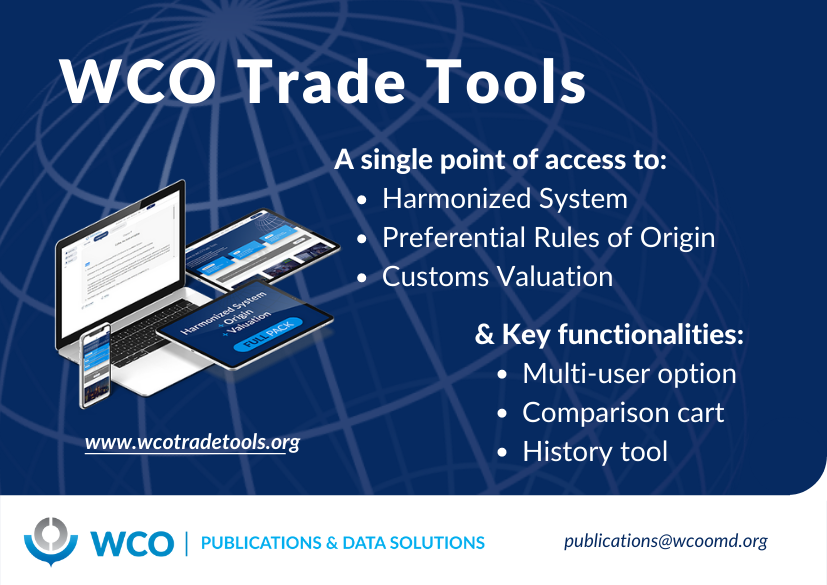 The system as a whole is largely unchanged from when it came into force in 1988, i.e., 34 years ago. The core elements of the HS, namely the General Interpretative Rules and the four-digit heading structure, are older still as they were taken over, with a few changes, from the predecessor of the HS – the Brussels Nomenclature which came into force in 1959. Given the changes which have taken place in the global trade environment over this long period, it is not surprising there is some concern that it is time for a health-check of the system and a look at how to keep it future-fit.

Do you know how many HS Editions there have been?

For this purpose, the WCO Secretariat has been given a mandate to establish a small project team for a two-year period. The team is tasked with collecting views and suggestions from stakeholders, studying the health of the system, and reporting to the WCO’s Members on the possibilities for potential improvements to the HS and its tools.

As the HS is a fundamental tool for Customs and trade, its stability is essential. Hence, no mandate was sought for the HS Study to draft amendments or make changes itself; it is purely exploratory. During the HS Study, the Members – through their work in the Harmonized System Committee – will be able to take up any useful and practical interim findings if they so wish. However the primary goal is for the HS Study to conclude with a report on the findings, complete with preliminary assessments of the feasibility of the options or strategies identified, where applicable, to give the Members a basis for determining whether they wish to proceed to a full strategic review.

How much work by our Members goes into maintaining and revising the HS?

Our top priority is engagement with, and the participation of, stakeholders, including Member administrations, international organizations, industry and sector associations, and the trade community.

Do you want to tell us what you think? Then check our website for details of how you can get involved in the HS Study or contact the project team using the email indicated below.

Where did the HS come from?

In 1931, the League of Nations Sub‑committee of Experts for the Unification of Customs Tariff Nomenclature completed the ‘grandparent’ of the HS, a Customs tariff nomenclature commonly known as the Geneva Nomenclature. Unfortunately, the outbreak of the Second World War halted work on its adoption.

In 1947, the European Economic Council set up the European Customs Union Study Group to prepare a common Customs tariff based on the Geneva Nomenclature. The Convention on Nomenclature for the Classification of Goods in Customs Tariffs came into force on 11 September 1959.

It was initially known as the “Brussels (Tariff) Nomenclature” (BTN), and renamed the “Customs Cooperation Council Nomenclature” (CCCN) in 1974. It was supported by the “Brussels Explanatory Notes”, an Alphabetical Index and, from 1974, a Compendium of Classification Opinions.

However, eventually it was considered that the BTN/CCCN was no longer sufficient to meet the needs of international trade, and in September 1970 it was decided to set up a study group to explore the possibility of establishing a BTN-based Universal Commodity Code. The study was completed in 1973, and the WCO established a Technical Team to draw up the “Harmonized Commodity Description and Coding System” (the Harmonized System). This expanded the code from the BTN’s four compulsory digits to a six-digit system, but kept the BTN core.

After 15 years of hard, but rewarding, negotiations, the Harmonized Commodity Description and Coding System, (which quickly became known as the Harmonized System, or HS in common usage) came into force on 1 January 1988.