This article looks at the close relationship that exists between rules of origin (ROO) and goods classification work. It argues that a change in tariff classification should remain the predominant criteria for expressing substantial transformation, and that the revision of the WCO Harmonized System (HS) should, to the extent possible, accommodate the needs of ROO.

Whilst attending a session of the Technical Committee on Rules of Origin (TCRO) at the headquarters of the WCO around 20 years ago, during a tea break a group of trade ministry officials whispered to each other:

In those days and, to a lesser extent, even now, the impact of the HS amendments on ROO was a topic openly spoken about among origin experts. To better understand the background to the above conversation, it would be pertinent to explain the relationship between ROO and the HS.

ROO and the HS

First of all, readers should remember that ROO exist to grant preferential treatment to certain goods provided specified origin criteria are met. Classification and origin determination of goods are closely interlinked. Typically, the requirements for determining origin are specified for individual products or product categories identified according to their respective HS code. This is what is meant by “product specific rules of origin,” or PSRs. Classification of goods is, therefore, of the utmost importance when establishing which ROO apply to a good.

Origin will, in these cases, be granted if the tariff classification of the final manufactured good is different from that of the non-originating (e.g., imported or of unknown origin) inputs used in its production. This criterion requires correct classification of the final manufactured product and of the input materials used in its production.

The intrinsic structure of the HS classifies goods from raw materials to semi-manufactured goods or intermediate materials, to finished goods. It, therefore, provides a solid, clear and transparent basis for determining whether a good is substantially transformed.

As long as the tariff shift rule is taken as a basis for expressing substantial transformation, PSRs must be aligned to the latest edition of the HS. In other words, any update of a goods nomenclature should be accompanied by an update of the PSRs, a process known as a “technical update.” Without this update, Customs officers and the trade community would be forced to use different editions of the HS for the purposes of determining the origin of the very same goods. 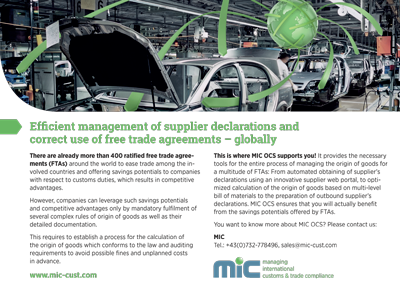 Impact of a technical update

From an origin expert point of view, HS amendments are not always welcomed. Each time the HS is reviewed and a new edition released, countries must, on average, update perhaps nearly 10 sets of preferential PSRs or more. Japan, for example, currently has 17 Economic Partnership Agreements (EPAs) or Free Trade Agreements (FTAs) in force, each with differing ROO. The update process escalates to any ongoing negotiations on PSRs – a real “nightmare” for origin experts!

The main feature of a “technical update” is, in fact, the backward adjustment of the HS structure from the amended to pre-amended one, in order to maintain the original PSRs. Table 1 provides an example of how changes are tracked.

What would happen after three or four reviews of the HS? The list of changes would look excessively complex and possibly need special software to be able to comprehensively understand them. It should be mentioned here that in December 2015 the WCO did publish a Guide for Technical Update of Preferential Rules of Origin, but although the methodology is clear, many resources would have to be allocated by Customs administrations in order for the work to be done.

If the technical update could be done by Customs administrations alone, things would not look that complex. However, for goods under the scope of preferential trade, the update requires the consent of all the government ministries involved, as well as all the parties to an FTA, which results in a long and much more complicated process.

In looking at alternatives, the question can be asked: is there a simpler way in which the issue could be handled, without having to undertake a technical update? Theoretically, there are two possibilities:

Several countries exclusively use the second alternative method for their Generalized System of Preferences (GSP) – the preferential tariff system extended by developed countries (also known as preference-giving countries or donor countries) to developing countries (also known as preference-receiving countries or beneficiary countries). It is also mentioned in a number of FTAs as an alternative rule, where a CTC is not suitable for determining origin: for example, in cases where goods are produced by simple assembly or a specified process/operation, such as chemical reaction or refining.

Applying the value-added criterion can be challenging for some stakeholders. If a buyer and a seller are related, obtaining the information needed on the value of the materials will not be so difficult. But non-related business counterparts may be reluctant to divulge the value of the content that their products contain in order to keep their profit margin confidential. Moreover, the value changes with currency fluctuations, year-end discounts, etc. Thus, the cliché “origin qualifying today, but not tomorrow, and again next week” is a typical argument against the value-added rule.

When the user-friendliness of the different methods to determine substantial transformation are weighed, HS-based rules score higher. It is simpler for suppliers to provide the HS code of the materials used than to provide their value.

As a matter of fact, according to a study conducted by the WCO Secretariat, on average 73% of ROO contained in the 20 largest FTAs are CTC-based rules. Moreover, in more than half of the FTAs, the proportion exceeds 95% (see “Study on the Use of CTC-based Rules in Preferential Rules of Origin”, February 2015).

Tariff shift rules should, therefore, remain predominant – a prerequisite being that all operators, even local businesses, and Customs officers should have a high degree of familiarity with the HS nomenclature.

In the context of numerous ROO policy-setting negotiations conducted by origin experts, it can be safely said that for most tariff items a straight CTH or CTSH rule can be set out. By accommodating the needs of ROO in an HS amendment (see below) and implementing the simple CTC rule, the issue generated by a technical update may be solved.

Experts working on the review of the HS should take into account ROO needs. A typical issue is the “part-to-part assembly” under the mechanical chapters of the HS. The fragmentation of the global value chain means that most enterprises procure different components of a product across several countries, based on those countries’ comparative advantage. If the subheadings of such a chapter were to accommodate more semi-manufactured goods/materials, the tariff shift rule could be a criterion to determine origin. A good example is the way Chapter 41 (Raw hides and skins (other than furskins) and leather) of the 2002 edition of the HS was reviewed to fully accommodate the work undertaken by the TCRO on the harmonization of non-preferential ROO.

At its 11th session in February 1998, the TCRO drafted some Chapter Notes (definitions) for Chapter 41 to bridge the gap between the 1996 HS text and the customary expressions used to qualify particular leather production operations. Among the new definitions was “Definition 1” relating to provisionally prepared leather, which was conceived in order to avoid making reference to the term “pre-tanned” found in HS 1996, as delegations did not share a common understanding on its scope.

Under the current global value chain model, traceability is the key factor to ascertain whether the materials used for the production of the goods are originating, particularly if a manufacturer procures such materials in the domestic market. Through interviews with a number of manufacturers, it appears that tracing is the biggest hurdle.

Even in the European Union (EU), which maintains, in my view, the most advanced supplier’s declaration system, there are cases where manufacturers cannot always rely on the declarations made by their parts suppliers, preferring instead not to claim preferential treatment. Suppliers tend to satisfy their buyer’s interest first instead of seriously checking the originating status of the products.

In fact, there should be an application supporting data sharing on the classification and, to the extent possible, the value of goods during the entire transaction. A simple device such as IC-chips could be affixed to a product, indicating not only the HS code, but also data on the good itself and its manufacturer, among other information. At the moment, the two-dimensional barcode may help in this task, as the chips would substitute this function when the cost of production becomes reasonably lowered.

There are currently over 400 FTAs and preferential trade arrangements in place worldwide, which establish lower rates of Customs duties for certain goods provided specified origin criteria are met. Most of the ROO stipulated in these agreements depend on whether there has been a CTC, a rule which I believe should remain predominant, given that it is highly administrable and user-friendly. This implies that the amendment of the HS should, to the extent possible, accommodate the needs of ROO. A challenge also lies in the capacity of firms from the upstream to the downstream manufacture of goods to classify their goods properly in order to claim preferential treatment.

Indeed, it is widely accepted that manufacturers do not have sufficient knowledge about the HS, nor the requisite technical skills, especially small and medium-sized enterprises (SMEs). This leads to the following assertion: that the WCO and Customs administrations are facing real challenges, one of which is enhancing knowledge of the HS among traders and the commercial world in general. Having said this, the WCO is currently focusing on this area through various initiatives, including the recent launch of its Academy for the private sector.

Hiroshi Imagawa worked at the WCO Secretariat on the harmonization of non-preferential ROO from 1994 to 2003, first as a Technical Attaché, later becoming a Technical Officer and then a Senior Technical Officer. Upon his return to Japan and until retiring in 2016, he was involved in ROO negotiations and their implementation in Japan Customs. He currently works for the Japan Association for Simplification of International Trade Procedures (JASTPRO).