The Republic of Serbia is geographically located on the trade routes connecting Western and Central Europe to the Southeast region of Europe, especially the countries of the Western Balkans, as well as Turkey, and further away, the countries of Western Asia. To facilitate trade operations and especially transit through the country, the Serbian government is in the process of revitalizing all traffic connections, with special attention being given to roads and railroads. As part of this endeavour, a new transport corridor, funded by the World Bank and called “Corridor X,” is under construction. It will stretch over 1,500 km from Austria and Hungary to Greece and Turkey, with the aim of fostering further regional integration and trade.

Besides investments in “hard” infrastructure, simultaneous efforts have been deployed to further simplify transit and border procedures, in order to improve efficiency along the route and to reduce costs to users. The larger objective is to support the development of the Serbian economy – a national priority – by creating an enabling environment for companies where they can run their business more effectively and process their trade operations in an easier and more expeditious manner, for the benefit of the entire country.

When it comes to simplifying transit per se, the Serbian government decided to accede to the Convention of 20 May 1987, which lays down common measures for the carriage of goods in transit between European Union (EU) Member States, EFTA countries (Iceland, Norway, Liechtenstein and Switzerland), Turkey, The Former Yugoslav Republic of Macedonia and, since February 2016, Serbia. The common transit procedure enables traders to transport goods between Contracting Parties to the Convention by virtue of a single electronic declaration and a single guarantee that is valid throughout the transit operation.

The computer system that allows for real-time messages to be exchanged between countries, the tracking of goods and the management of guarantees, from end-to-end, is a stand-alone application that has to be implemented by all Parties and is called the New Computerised Transit System (NCTS). The NCTS gateway is connected to the Customs Management Systems (CMS) of all countries implementing the Union and common transit procedures. Customs offices communicate and exchange standard messages electronically through the system, in their native languages. As for traders, they communicate electronically through the national CMS of the country that they are operating from, but are not connected to the NCTS.

The common transit procedure is the first electronic Customs procedure ever introduced in the country, replacing a burdensome and paper based system that was prone to fraud. Its implementation required a lot of preparation and investment in information and communication technologies. Serbian Customs is also working on the development of an automated system to process import and export operations. 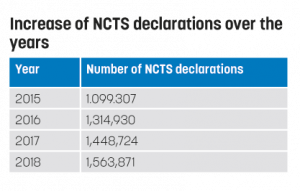 Customs officers have also been trained and are now more aware of the need to prevent unnecessary border delays, in addition to being able to track transit operations more easily. Specialized training is also organized once a year, in order to inform Customs officers about the latest innovations and particularities of the transit procedure, and a “transit operational network” gathering “regional transit coordinators” has been introduced, with the task of ensuring uniformity in the implementation of the procedure by establishing best practices, disseminating them, and discussing any relevant issues.

Moreover, required bank guarantees are considerably lower and the time required for the transit procedure has been reduced as there is no longer a need to spend time at the border waiting for Customs documents to be issued. This was measured as part of a project with the World Bank, during which all transit procedures were assessed (national transit, the TIR carnet and the common transit). This reduction in time as well as the elimination of a document issuance fee has resulted in reduced transportation costs.

In parallel to the computerization process, a number of essential accompanying procedures and legal enhancements were implemented to reinforce controls in order to secure Customs debt collection, whilst granting simplifications for operators who fulfilled certain criteria. These procedures and enhancements include:

To help companies, forwarders and transport agents with the implementation of the new electronic system, the Serbian Customs organized information sessions and set up a “Help Desk” for any questions related to the implementation of the system. In addition, small and medium-size enterprises, which play a key role in a country’s economy, are provided free of charge with an application to connect to the Customs electronic transit system, freeing them from having to develop their own software to do so. Indeed, Serbia Customs is committed to providing ongoing support to all stakeholders, in order to ensure the effective implementation of the system, as this will continue to boost the country’s international trade.

More information
Olga Protić
Head of the Department for Transit of Goods
protico@carina.rs