Small island states and the various issues that they face, from whatever perspective one looks at them, are a priority for the global community as a whole. This article explains the challenges and peculiarities of Customs administrations of small island economies by looking at the specificities of the Mauritian economy and its trade flows, identified areas of change, and the measures and initiatives undertaken to increase efficiency and reduce trade costs.

Located off the southeast coast of Africa, Mauritius is an island state of approximately 1.3 million inhabitants and is categorized as a Small Island Developing State (SIDS). These States were recognized as a distinct group of developing countries, facing specific social, economic and environmental vulnerabilities, at the United Nations Conference on Environment and Development (UNCED) that took place in Brazil in 1992.

Moreover, the World Trade Organization (WTO) also categorized such small, vulnerable economies (SVEs) as those that account for only a small fraction of world trade and face specific challenges in participating in the global economy due to a lack of economies of scale and limited natural resources, among others.

Over the past 50 years since achieving independence, Mauritius has witnessed considerable economic progress, moving from a GDP of 841 million Mauritian rupees to over 406 billion in 2017. In fact, the country has been growing at an average rate of 5.4% since 1968, while undergoing constant transformation in its economic structure, from a mono-crop economy with a high reliance on sugar to a well-diversified economic model based on services and innovation. 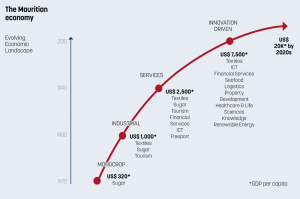 The country has also demonstrated exceptional performance and dynamism, through a combination of forward-looking policies from the Mauritian Government and the pro-activeness of the island’s private sector (Source: Mauritius Chamber of Commerce and Industry – Economic &Trade Review 2017).

Mauritius is a politically stable country with a strong institutional framework, a favourable regulatory environment and low levels of corruption, which act as a foundation for economic growth. Its open trade policies have also been key in sustaining the country’s development. Moreover, its financial sector is well developed and, as such, Mauritius has begun to position itself as a platform for investment, linking East Africa with India and China.

On the plus side, Mauritius is ranked 20 among 190 economies in the ease of doing business, according to the latest World Bank annual ratings, accentuating its lead as number one in Africa. Mauritius’ rank improved to 20 in 2018 from 25 in 2017. This good score is a testimony of the Government’s sustained efforts to build a robust and resilient economy.

Below is a list of constraints and challenges that face Mauritius, and which could face other small island economies:

All these indigenous and exogenous factors contribute to driving up the costs of trading across borders for small economies, resulting in major disadvantages for Mauritius’ economic development.

Against such a background, SVEs should seek to integrate into the global economy by tackling issues like trade and food security standards, capacity constraints, and structural handicaps and vulnerabilities. Small economies need to reaffirm their commitment to trade liberalization and ensure that trade plays its full part in promoting economic growth, employment and development. In addition, they should:

Below are some milestones in the Mauritius Revenue Authority’s (MRA) Customs reform process:

The following initiatives and measures have been taken during recent years by the Government and key organizations with a view to facilitating trade.

The Business Facilitation Act 2017 instituted a number of legislative amendments to eliminate regulatory and administrative bottlenecks to investment, and to facilitate trade. A host of measures has also been taken to streamline processes and procedures in the logistics supply chain, reducing both the cost and time for imports and exports.

Consignments requiring clearance from the agencies involved are cleared within 30 minutes by Customs. Moreover, as of 14 August 2017, only six out of 14 items are subject to export permits.

A trade promotion agency – the Economic Development Board – has been set up to re-engineer trade processes and facilitate business. The Board is complemented by the National Trade Facilitation Committee that ensures smooth implementation of the WTO Trade Facilitation Agreement (TFA).

A Trade Obstacle Alert Platform enables trade operators to report any obstacles that they face. The authorities concerned are also able to respond to these operators via the Platform. All reports are publicly available online.

Several measures have been implemented to increase the efficiency of the port and the handling of goods. The quay apron has been extended from 560 metres to 800, with a dredge depth of 16 metres, thereby allowing the quay to accommodate two large vessels of 367 metres at the same time.

Port performance has increased in terms of the number of containers discharged per hour and reduced operating costs, with an average productivity of 22.5 moves per hour. It is projected that around one million containers will be handled by the end of 2019 or the beginning of 2020.

Customs has implemented a risk management system, allowing clearance and release of goods based on risk criteria. This measure expedites the clearance of legitimate consignments, while enabling Customs officials to focus on high-risk consignments. Both Customs and economic operators gain in terms of cost and time, due to the expedited clearance of goods.

The tool is aligned to the WCO Data Model and fully automates the application and payment process for a trade permit, while providing traders with the facility to track the progress of applications in real time. It also reduces the time and cost of doing business in Mauritius, and provides more transparency at both other government agency and Customs level.

Amendments to Customs laws have been made with a view to facilitating trade and the clearance of goods by border control authorities:

Implementation of the TFA

Mauritius was among the first five countries to ratify the TFA in March 2015, and has also already submitted its Category A, B and C commitments. As of now, all measures in the B and C categories have been upgraded to Category A, except for Article 5.3 Test Procedures, Article 7.4 Risk Management and Article 10.4 Single Window.

A key trade facilitation measure, advance rulings on tariff and origin came into operation in 2013. Since then, the MRA has issued some 2,433 advance rulings. As a result, the number of disputes between Customs and its stakeholders relating to tariff, valuation and origin has significantly declined. Economic operators are able to take informed decisions that stem from high predictability and certainty, leading to a reduction in Customs clearance and cargo dwell time.

In line with the concept of coordinated border management (CBM), cross-border regulatory agencies – the Veterinary Services Division, the Food Import Unit, the Government Pharmacist, the Mauritius Standards Bureau and the National Plant Protection Office – are housed at Customs to ensure expedited clearances.

The Mauritian Government has also taken many measures to ease transactions and promote exports, while taking environmental and social concerns into account:

There is a need to relentlessly push at the WTO for SVEs to be granted S+DT privileges in the same manner as they are granted to “least developed countries” (LDCs) to compensate for the specific and unique challenges that SVEs face. Otherwise it will be very difficult for SVEs to integrate into the global value chain and benefit from international trade. A precondition for the above, however, is that all SVEs should speak with one voice at dedicated sessions on SVEs at the WTO.

Last but not least, the “Annex D” group of organizations, supporting the implementation of the TFA, should give special attention and priority to SVEs for the purpose of building capacity in the area of standards, laboratory testing, and strengthening resilience to natural disasters.