The Brazilian Authorized Economic Operator (AEO) Programme can be considered one of the most advanced and successful in the world. Indeed, from the outset, the Programme has featured some prominent characteristics. Among other things, an internationally renowned consulting firm was involved in its design, technical and financial support was provided by private sector entities wishing to join it, and it was backed by high ranked officials from the Customs management team and the Federal government.

In Brazil, the AEO Programme has strategic institutional value, and its implementation is followed directly by the President’s Cabinet. The Programme will complete its last implementation phase in 2019. With the WCO having chosen the theme “Smart borders for seamless trade, travel and transport” for the year ahead, Brazilian Customs decided that it was the perfect time to shed light on the Brazilian AEO Programme’s success story.

The Brazilian AEO Programme is based on the provisions of the WCO SAFE Framework of Standards to Secure and Facilitate Global Trade, although it does not focus only on the security of the supply chain as it offers two types of certification: AEO-Security and AEO-Compliance. These certifications are explained below:

The AEO Programme is fully aligned with Article 7.7 of the World Trade Organization’s (WTO) Agreement on Trade Facilitation, which provides for an “Authorized Operator” scheme and states that supply chain security is one element of an AEO programme but is not mandatory. It represents a modern approach to Customs and border control, and offers a broad list of benefits to participants such as reduced release times, lower rates of Customs examinations, the possibility to submit pre-arrival declarations and to request immediate release of cargo, and a direct communication channel with Customs to solve issues or pose questions.

The implementation of the Brazilian AEO Programme has been carried out in stages: AEO-Security certification was launched in 2014 and AEO-Compliance certification in 2015. In 2016, steps were taken to negotiate the first AEO mutual recognition agreements (MRAs), and in 2017, a cross-government concept called the “Single Government AEO Status” was designed, the idea being that other internal agencies, starting with the Agriculture (MAPA) and Health (ANVISA) authorities, use the trusted trader concept for all licensing and regulatory requirements.

Throughout the implementation process, the whole AEO Programme was constantly evaluated by all stakeholders, including the private sector, the outsourced consulting team, the project team, Customs officials, and the foreign trade community in general. The certification process, the extent of the benefits, and the main problems that AEOs still face in conducting their foreign trade operations are constantly being discussed. In 2018, four technical forums were held, bringing together Customs, AEOs and other Customs stakeholders to strengthen the philosophy and benefits of the AEO Programme.

More than 220 companies have been certified thus far, and an equivalent number is in the process of certification. Managing the increase in the number of applications, by the way, is the biggest challenge that Brazilian Customs faces at the moment.

Today, AEOs account for more than 20% of import declarations and almost 15% of export declarations. With the current growing number of certified companies, Customs expects that 50% of Brazilian foreign trade transactions will be covered by the AEO Programme by 2019.

The success of the Brazilian AEO Programme has had a huge impact on Brazilian Customs. There has been a clear improvement in risk management capacities, as well as a significant reduction in the workload of the Customs clearance units. More foreign trade operations processed by AEOs mean easier risk management and labour savings. Over the past four years, the average workload fell by more than 30% and about 100 Customs officials in charge of clearances were redeployed to other activities. 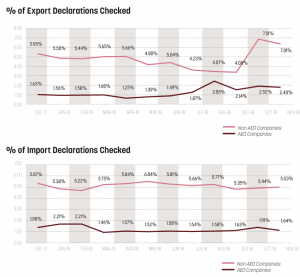 The rate of documentary and physical inspections has also dropped, bringing more predictability to transactions, a very important factor for traders. The number of inspections is 77.5% lower at export and 74.5% lower at import for AEOs compared to regular operators. On average, an AEO is inspected four times less, both at import and at export.

AEOs may request tariff codes in advance, with a pre-scheduled deadline of 40 days after receipt of the request (non-AEOs can also apply for an advance ruling on tariff classification, but there is no set deadline for the administration to reply), and data requirements related to temporary admission have also been reduced. Moreover, the recent implementation of the pre-arrival declaration and the immediate release of goods has created even greater gains for operators. Storage costs, too, have almost disappeared, and predictability is growing at unprecedented levels. All of these advantages have already resulted in savings of hundreds of millions of dollars.

In addition to Brazil’s biggest foreign trade players, the designers of the Brazilian AEO Programme also wanted to attract small and medium-sized enterprises (SMEs). To do so, informative lectures and seminars have been organized across the country, with more than 6,000 people participating thus far. The SMEs that have already been certified are mostly cargo agents and transportation companies, with most of them achieving AEO-Security certification.

Making the certification process simple and transparent, ensuring all information is available, and promoting the new approach and philosophy of the AEO Programme are the best ways to attract companies of all sizes into the Programme. A comprehensive website has also been developed to provide all necessary information on becoming an AEO, including the legislative text, application forms, explanatory videos, the list of requirements and, of course, a link to an online platform where companies can enter their application and related documents.

Expedited release of goods at the borders is the main benefit that companies look for when joining the AEO Programme. As Brazil reviews and improves its global foreign trade processes, the time necessary for the clearance and release of goods will be reduced for all traders, which may make the Programme less attractive. This is a challenge that many countries offering high levels of trade facilitation encounter.

To deal with this, a new list of benefits for AEOs is under consideration. They include the deferred payment of taxes, fees and charges, a measure to be implemented once the new import system is fully operational, and the possibility to submit a single Customs declaration for all imports in a given period.

Brazilian Customs is also trying to increase the number of AEO MRAs. An MRA has existed with Uruguay since 2016, and more than 10 other MRA initiatives, each one at a different maturity stage, are underway. Some are in the initial negotiation phase, such as the MRA with China and Hong Kong (China), while others are at an advanced stage or almost complete, such as the MRA with Mexico.

In addition, work plans have been signed with Bolivia, Peru and the United States, as well as between countries of the Mercosur trade bloc, to which Brazil belongs together with Argentina, Paraguay and Uruguay. Mercosur countries are also discussing the details of a work plan with countries of the Pacific Alliance, which comprises Chile, Colombia, Mexico and Peru.

Engaging other government agencies in the AEO certification process (i.e. achieving “Single Government AEO Status”) is also something Brazilian Customs is working on, the objective being to offer companies the possibility of providing a guarantee that they meet the requirements of other authorities with direct control over foreign trade.

Brazilian Customs has been working hard to attract other border agencies to participate in the AEO Programme. In this regard, it has designed a brochure explaining how to join the Programme and how to apply risk management, as well as a Web-based system, connected to the Brazilian Single Window, where agencies joining the Programme can control and manage their “Single Government AEO Status” applications.

Under the model, each supervisory authority has to define its criteria for granting AEO status and indicate the benefits it is prepared to provide. Once the terms, methodology and criteria are agreed upon, joint regulatory acts will be signed between Customs and the given authority. So far, this kind of regulatory framework has been signed with the Ministry of Agriculture, the Civil Aviation Agency and the Army. The Sanitary and Phytosanitary Agency has also shown great interest in following the same path.

Within the limits of its competencies, each service has to ensure that the applicant conforms to the jointly established rules and obligations. Applicants wishing to obtain the “Single Government AEO Status” can find the requirements on the Web platform. Documents provided by the interested party are then shared among the public agencies and entities involved in the Brazilian AEO Programme.

The regulatory border agency will define the benefits or facilitation measures that will be granted to AEO-certified companies (“Single Government AEO Status”). It is important to note that differentiated levels of benefits can be established in relation to the degree of safety or compliance demonstrated. The role of these authorities, such as the Sanitary and Phytosanitary Agency, the Ministry of Agriculture, the Army, and the Civil Aviation Agency, is also more limited in comparison to Customs. Therefore, they will certify and monitor only those exporters or importers whose activities fall within their sphere of competence.

A study[1] released recently by the National Confederation of Industries in Brazil indicates that the benefits provided to certified AEO companies have already enabled them to save 1.5 billion US dollars, and that these economies will grow even more in the coming years, reaching 17 billion US dollars by 2030. This money is expected to be ploughed back into the companies’ businesses, allowing them to expand and improve – leading, in particular, to the creation of more jobs. The study also states that, by 2030, the Programme will have added more than 50 billion US dollars to Brazil’s gross domestic product.

By gradually eliminating “red tape,” and rolling out more of the “red carpet,” the Brazilian AEO Programme will benefit the country’s entire economy.