Since the Fourth Industrial Revolution was mentioned in 2016 at the World Economic Forum, the impact of technologies such as artificial intelligence (AI), the blockchain and “big data” have become issues discussed at length worldwide. In Korea, in preparing for the future, the government formed a “Fourth Industrial Revolution Committee” in 2017, directly reporting to the President. The Committee is mandated to coordinate important policy matters pertaining to the development and acquisition of new science and technology.

As part of the government’s efforts, the Korea Customs Service (KCS) is looking into the potential application of new technologies. In 2017, the KCS established an ICT Development Division for this task, and, in 2018, launched the “Fourth Industrial Revolution and Smart Customs” project, with the aim of introducing AI, the blockchain and big data to back up Customs processes. In this article, the KCS presents the steps taken to adopt blockchain technology.

The benefits of the blockchain, first known to the public as the technology behind Bitcoin, the world’s first virtual money, are now pretty well understood: information can be exchanged without an intermediary, whilst ensuring data integrity and providing a full audit trail. Blockchain technology is being adopted around the world in sectors such as finance, distribution, manufacture, and health care. Unfortunately, in most cases, solutions that have been developed are at a verification or pilot stage, and it is still difficult to find examples of a tool applying the technology.

With the above in mind, and to give impetus to its Fourth Industrial Revolution and Smart Customs project, in 2017, the KCS decided to undertake some research aimed at exploring the application of the blockchain to other areas, besides cryptocurrencies.

To do so, the KCS first decided to join the joint public-private maritime export logistics consortium led by the domestic ICT company, SAMSUNG SDS Co., which brings together 41 entities, including government agencies such as the KCS and the Ministry of Maritime Affairs and Fisheries, as well as transporters and consignors.

After consulting with all participants, the KCS was able to confirm that it was technically possible for logistics actors to share logistics documents such as bills of lading and letters of credit through a platform based on blockchain technology. Such a solution would enable the prevention of forgery and falsification of import/export logistics documents, and the simplification of their issuance procedures. The conclusion was that there was a need for a government-led project to establish a blockchain-based logistics platform.

The KCS’s second step was to review areas where the use of blockchain solutions would make sense. The import/export clearance process was identified as a good start, given that it would benefit from a solution that would guarantee information reliability, real-time information sharing, and simplified work processes. It then identified the clearance processes best suited to the exercise. Three were selected: export clearance where the consignor is a corporate entity, e-commerce imports where the consignee is a natural person, and cross-border information exchange.

A gradual and systematic approach was adopted, taking into account the significant impact that the new technology would have on the overall trade environment, and the necessary legislative and policy changes that would be required. Pilot projects were carried out to uncover any technical and institutional challenges, and formulate ways to steadily integrate the blockchain into existing Customs systems. The applications developed as part of these pilots all use “hyperledger fabric,” a private blockchain framework implementation (a permissioned blockchain infrastructure).

At import or export, the clearance process is rather complicated, and involves a great number of actors who need to share a vast amount of information. In Korea, the sharing of information between parties to a transaction is only possible on a one-to-one basis, via email, fax, mail or individual information technology (IT) systems, to the detriment of data quality and accuracy, not to mention the fact that data may be falsified at some stage in the process.

The pilot project related to the export clearance was carried out by the SAMSUNG SDS Co. and KCNET Co. consortium. They worked with 49 business participants, consisting of exporters, shippers and warehouse operators, within seven working groups. During the pilot, participants shared 22 types of documents in real time, including the commercial invoice, the packing list, the bill of lading, the booking request or confirmation, and the export declaration. Participants later added new information and documents on the shared ledger.

The platform will undergo further testing during the year and, based on the outcomes of the final pilot, an application will be designed. In addition, the pilot’s results are expected to serve as the basis for the development of an application for the import clearance process.

E-commerce transactions involve individuals unknown to an administration. Although goods bought online by individuals represent, in terms of value, a small share of global imports, Customs is concerned with preventing contraband and other prohibited items from entering a country. At the moment, assessing risk presents some constraints, given the low quality of data available from these transactions.

Here again, blockchain technology would facilitate the clearance procedures and enable Customs to perform high-quality risk management. In the pilot project related to e-commerce, two companies, Nomadconnection Co. and Matrix2B Co., developed a platform. The aim of the project was to test the feasibility of mutually sharing real-time information between e-commerce, transport companies and the KCS.

In other words, there is a “reporting” threshold for goods in respect of which a full Customs declaration must be submitted: for express cargo, a “list clearance” procedure allows a trader or individuals to receive goods and, providing their value is below the de minimis threshold, clear them by submitting 26 pieces of information, such as the trader’s name and address, the consignee’s name and address, and the type and price of the goods; as for goods entering via the international mail channel, they are cleared on-the-spot.

The application makes use of “smart contracts” to handle transactions under the list clearance procedure: required information is collected automatically if the procedure’s set conditions are satisfied. Other processes will gradually be tested in the future.

Ensuring reliable information exchange between countries is critical to improving work processes and further facilitating trade. However, for countries to agree on such a level of cooperation requires trust.

The big advantage of blockchain technology is that it creates an environment of “trust” between and among unknown parties to transact business and exchange information. It is, therefore, the most suitable technology to establish automatic cross-border data exchange between Customs administrations.

The pilot related to this project aimed at testing a solution to exchange certificates of origin, a document that remains in paper form in many countries, although the number of FTAs being concluded is growing, and, with it, the number of certificates being issued.

As Korea and Vietnam are currently discussing the possibility of dematerializing certificates required to provide preferential entry of originating goods, the KCS worked with Vietnam Customs as well as with Korean exporters and Vietnamese importers. The application built as part of the pilot enabled certificates of origin issued in Korea to be shared in real time with Korean exporters, Vietnamese importers, and the Vietnamese Customs administration.

In preparation for other types of data exchange in the future between the two countries, the KCS also successfully completed tests on the IT environment of the Vietnamese Customs administration, including the installation of a new server. 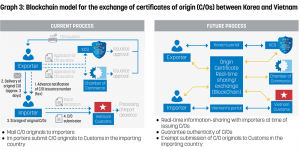 The KCS has set a vision to integrate data on cross-border trade and international logistics flows into one place, and looks forward to the day when a new clearance and logistics platform will be established, enabling all actors in the logistics chain, including manufacturers, exporters, transporters, government agencies, importers and consumers, to share reliable real-time information.

In fact, the KCS’s own electronic Customs clearance system, UNI-PASS, which computerizes Customs procedures and provides for the automation of the clearance process, is being examined with the idea of establishing a new platform based on blockchain technology. The objective is to strengthen data accuracy, process reliability, promptness, and efficiency.

The blockchain is a new technology that is maturing. Currently, robust research and development is being conducted on critical issues such as scalability and interoperability. By implementing a range of blockchain pilot projects, the KCS is contributing to global efforts that are exploring ways in which the technology can be applied in actual work settings.

From the outset, the KCS has demonstrated its willingness to take up the challenge to unlock the potential of cutting-edge technologies that will transform society and ease entry into the Fourth Industrial Revolution. Indeed, the KCS believes that these efforts will enable it to make long sought-after international standards in global trade and logistics a reality, and will change the game for Customs administrations.