The ATA[1] Carnet is an international Customs document that permits duty-free and tax-free temporary admission of most goods for up to one year. It enables countries, businesses and border agencies to expedite the Customs process by utilizing unified, ready-to-use declaration forms and eliminating the lodging of a guarantee, bond or cash deposit in the country of temporary importation. At the end of 2020, the ATA Carnet procedure has been implemented in 78 countries and Customs territories. In each one of them, the Customs authority appoints a National Guaranteeing Association (NGA) which guarantees payment of import duties and taxes in cooperation with foreign NGAs around the world. Under the NGA’s umbrella, there can be multiple issuing associations (IAs) in each country to process Carnet applications. Processing fees apply as well as a surety bond which will be returned if the Carnet has been used correctly. The International Chamber of Commerce (ICC), the institutional representative of over 45 million companies worldwide, is responsible for administering the global guarantee chain affiliated with all NGAs.

The ATA Carnet is still today a paper-based document, although its digitization (turning the physical paper into an electronic file) and the digitalization of the Carnet-based temporary admission process has been discussed for some years now. The fact is that, given the complicated nature of temporary admission and the complexity of the data exchanges taking place among the various parties involved (ATA Carnet holders and representatives, issuing associations, national guaranteeing associations and Customs authorities), the task has proven to be challenging. The digitalization of the process must be done at an international level in an organized and coordinated way.

With this in mind, the WCO took the initiative some years ago to gather key stakeholders to discuss the creation of an electronic ATA Carnet (eATA) solution. ICC presented its eATA concept to the WCO back in 2016 and, with the support of the Organization, implemented an eATA pilot project in four countries, namely Belgium, China, Russia and Switzerland. Once the test phase is finalized, the innovative ATA Carnet digital ecosystem that ICC has designed is expected to grow quickly as more and more countries realize the benefits of moving from a paper-based process to a digital one.

How the eATA Carnet works

Let us take a look at the technicalities of the ATA Carnet digital ecosystem. Figure 1 provides a general overview of its design and architecture: the system per se is made up of five types of component (Exhibit 1-5), while a sixth component (Exhibit 6) represents the national tool(s) developed by each issuing/guaranteeing association. 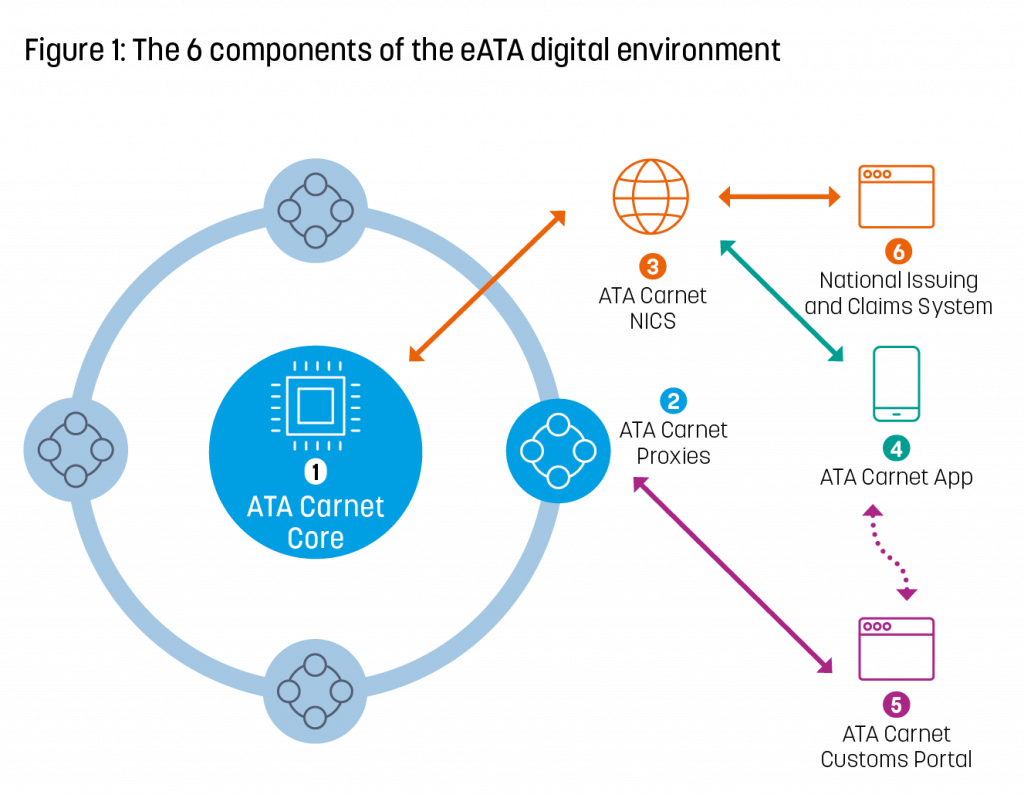 The ATA Carnet Core (Exhibit 1) is the central IT system that links the other parts together and ensures that the exchange mechanism is secure and robust. This component includes various monitoring, reporting, alerting and analytics tools developed to enable ICC to manage the eATA digital environment.

ATA Carnet Proxies (Exhibit 2) strengthen the connection speed and enable each user to connect easily to the Core. ICC plans to deploy six proxies around the world. Each proxy will record a copy of all the eATA Carnets issued and can back up the other proxies in case of a technical failure.

The ATA Carnet NICS (Exhibit 3) provides an application programming interface (API)[2] to enable each country to integrate its own national issuing and claims system (Exhibit 6) with the ATA Carnet Core. Six API bases have been built to cover the entire world. NGAs/IAs can either integrate their systems via one of the six API bases or be hosted separately.

The ATA Carnet App (Exhibit 4) is the mobile application provided to Carnet users (holders/representatives). It is a secure wallet where users can store the eATA Carnets purchased from an IA/NGA and prepare border crossing declarations via the app. Each user has a profile and can therefore access the system via any connected devices. When an eATA Carnet is issued, users receive instructions on how to download it in the mobile application, and a QR code is created for each declaration. When crossing borders, users simply need to show Customs the QR code.

Last but not least, the National Issuing and Claims System (Exhibit 6) represents the digital tool(s) developed by NGAs/IAs and to be integrated with the ICC system. This component is not standardized, as each country has its own specific and unique way of managing issuance and claims. As a result of integration, data or information received from or sent to ICC’s ATA Carnet system is standardized.

To protect from the various threats and vulnerabilities associated with digital processes, organizations must adopt safe and secure frameworks, methods, standards and best practices. ICC had to deal a wide variety of cyber security challenges to ensure that the ATA Carnet digital ecosystem could operate while guaranteeing data confidentiality, integrity and traceability.

ICC selected Microsoft Azure, a cloud platform that offers tremendous capabilities in terms of both functionalities and security. Microsoft Azure datacenters are top-tier (Tier IV), which means that they apply strict security and protection standards. To ensure data confidentiality and integrity, ICC has implemented several encryption mechanisms. Data is encrypted at rest and in transit to the best symmetric and asymmetric cryptographic standard. Identification, authentication and authorization are managed via digital certificates, which are electronic passwords that allow a person or an organization to exchange data securely over the Internet. Access to the various web interfaces and mobile applications is managed via multi-factor authentication (MFA), an authentication method that requires the user to provide two or more verification factors in order to gain access to a resource.

Managing such a complex digital environment requires proper management, orchestration and automation tools. That is why ICC is also implementing DevOps, a method to structure the deployment of fixes, optimizations, new functions and so on.

ICC has prepared a set of training materials for Carnet holders and national Customs authorities. A ticketing system was also set up in 2019 to support the deployment of the pilot project and its participants.

The very first temporary admission operation using the eATA Carnet was carried out successfully in Switzerland on 20 October 2019. Other operations soon followed in Belgium, China and Russia. In the four pilot countries, only selected Customs offices participated in the pilot phase.

The tests demonstrated that the eATA concept works well, and that the digital tools developed by ICC function as expected. To pave the way for national Customs agencies to adopt eATA Carnets, a standardized notification template was approved by the WCO ATA/Istanbul Administrative Committee on 16 November 2020. The template sets clear guidelines for governments and national Customs to activate the acceptance of eATA Carnets.

A key challenge during any pilot project is to carry out a sufficient number of operations for the pilot to be meaningful, the objective being to move with confidence to the full implementation phase. As international travel has been severely impacted by the COVID-19 pandemic, the volume of trade operations using ATA Carnets has dropped by 60% to 70%, and it has become difficult to find individuals and companies wishing to test the eATA solution.

It might therefore be necessary to continue the pilot project both with “real” Carnets (where the holder, goods and transaction exist) and “demo” Carnets (where the holder, goods and transaction are fictitious). In this way, pilot countries could continue testing the system and gathering user experience and feedback, and still be fully prepared for the implementation phase. To boost real transaction volume, it would also be helpful if more Customs offices could participate in the project. Those suggestions and plans will be discussed at the next WCO eATA Working Group meeting which will take place during the first half of 2021.

[2] An API is a tool that specifies ways in which software can interact with an application such that the data from the latter is available in the former. APIs interact with the target application exclusively through the back end.